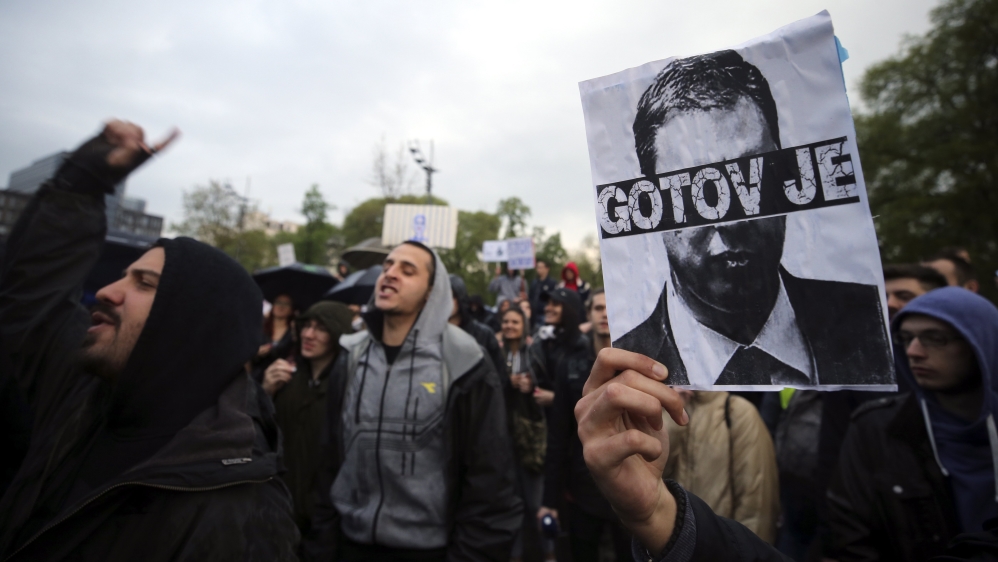 Government officials say rallies are the work of political opponents as the crowds march in Serbia’s capitals on day three.

On Wednesday, crowds marched through the capital Belgrade and other cities, whistling and chanting slogans such as “Vucic, you stole the election” and “End the dictatorship”.

Vucic, who will take office as president at the end of May, won the presidential elections on Sunday with a clear majority and received 55 percent of the vote in the first round.

Protesters have gathered in the streets to respond to calls on social media. It was not clear who was organizing the events, although government officials say the demonstrations are the work of political opponents.

The protesters said they see Vucic as an autocrat and his Serbian Progressive Party as corrupt and instrumental in what they believe to be a fraudulent election.

Demands made online by a group of students included the dismissal of the electoral commission, media regulator and top editors of the state-run RTS TV for allegedly failing to allow a free and fair vote.

“I’m here because I think there is no democracy in this country anymore,” Belgrade protester Mihajlo Saranovic told the Associated Press.

“I think something has to change and I am here to express my dissatisfaction with the current situation,” he said.

The students said they would call for early parliamentary elections if their requests were not met.

Protesters hold a picture of the newly elected President of Serbia, Aleksandar Vucic, with the slogan “It’s over”. [EPA]

Vucic interior minister Nebojsa Stefanovic said on Wednesday that the street protests are “highly political” and are orchestrated by opposition candidates who lost the election.

On Monday Vucic said: “Everyone has the right to be dissatisfied with the election results.”

The opposition has claimed the election was marred by major irregularities, including media muzzling, voter intimidation and bribery.