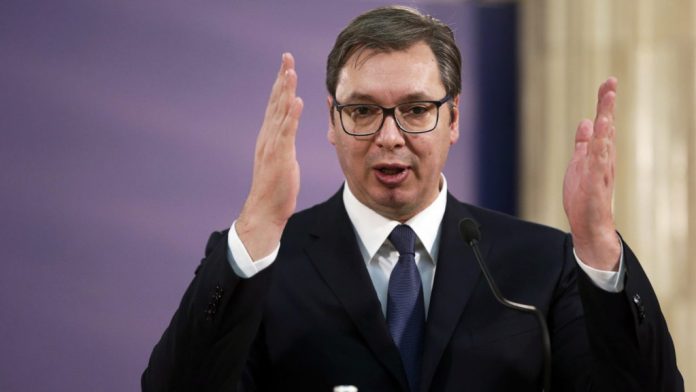 The President of Serbia, Alesandar Vuiqi., Has called an urgent session of the National Security Council for Tuesday at 10 am.

According to Serbian media, Telegrafi reports, the main topic of the session will be “recent events in Kosovo”.

As further stated, the final decision on the removal of license plates from Serbian cars by the authorities in Kosovo will be discussed there.

A reaction about the latest developments has also come from the leaders of the Serbian List who came this morning at the Jarinje border crossing “to give support to the gathered Serbs”.

And the leader of the Serbian List, Goran Rakic, called on the President of Serbia, Aleksandar Vucic, “to help the people and to react according to the possibilities.”

Otherwise, the Government of Kosovo has decided today to establish reciprocity with Serbia in terms of vehicle license plates.

The document was signed today by the Minister of Internal Affairs, Xhelal Sveçla.

The decision made public by Minister Sveçla states that “it is obligatory to provide temporary license plates for all vehicles that have Serbian license plates and enter the territory of the Republic of Kosovo.

Equipping with temporary license plates is done at all border crossing points of the Republic of Kosovo ”.

The decision further states that the validity of these temporary license plates is 60 days.

In addition, police forces were added to the border crossings with Serbia this morning to oversee the implementation of this decision. / Telegraphy /

I Got a ‘Mild’ Breakthrough Case. Here’s What I Wish I’d Known.