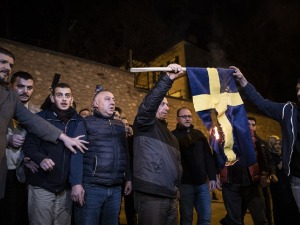 Ankara canceled a visit to the Swedish defense minister, due to Sweden’s decision to allow a protest where far-right Danish leader Rasmus Paludan burned a Koran near the Turkish embassy in Stockholm.

Paludan was given permission to organize the protest, although Sweden’s foreign minister expressed concern that it could delay Ankara’s decision to ratify Sweden’s bid for NATO membership.

“We strongly condemn the vile attack on our holy book… Allowing this anti-Islamic act, which targets Muslims and insults our sacred values, under the guise of freedom of expression is completely unacceptable,” the Turkish Foreign Ministry said.

The announcement came after Paludan burned a copy of the Koran near the Turkish embassy.

The Turkish ministry called on Sweden to take necessary measures against the perpetrators and called on all countries to take concrete steps against Islamophobia.

A separate protest was held in Stockholm in support of the Kurds and against Sweden’s bid to join NATO. A group of pro-Turkish protesters also held a rally in front of the embassy. All three events had permission from the police.

“Sweden has far-reaching freedom of expression, but that does not mean that the Swedish government or I support the opinions expressed,” Bilstrom said on Twitter.

According to Reuters, Paludan stated that he was protesting against Islam and, as he said, Turkish President Recep Tayyip Erdogan’s efforts to influence freedom of speech in Sweden.

In Istanbul, a group of protesters set fire to a Swedish flag in front of the country’s consulate in response to the burning of the Koran.