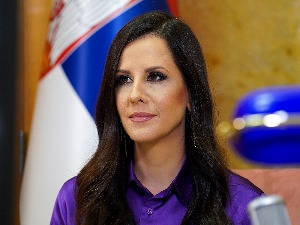 At the beginning of the summit, which was attended by the first ladies and wives of the prime ministers of North Macedonia, Serbia, France, Iceland, Estonia, Lithuania and Latvia, Olena Zelenska thanked Tamara Vučić for the two ambulances that were agreed to be donated by Serbia to Ukraine of the last conversation between Zelenska and Vučić.

Tamara Vučić emphasized the importance of Zelenska’s initiative to establish a platform for communication and close dialogue between first ladies and gentlemen around the world.

“In my humble opinion, it contributed to the improvement of our communication and cooperation, but also to our united voice being heard,” said Tamara Vučić.

She reminded that the two previous summits were devoted to acute problems and issues and current priorities caused by the war in Ukraine and which still exist.

“Perhaps we don’t have the right to present some other topics that need to be faced, which are outside the mentioned framework. I hope that it will be achieved soon, that we will get out of those circumstances,” said Tamara Vučić.

She also said that when that moment comes, she would like them to focus on children and their benefits, and especially on the two periods of children’s lives.

“The first is the period of the first five years, that is, early development and early education, and the second is adolescence, which is full of insecurities, challenges and problems that children face, and I think that by joining forces we can help them and make big changes in that sphere because the way we treat children today has a direct impact on our future and the future of all humanity,” said Vucic.

She pointed out that it would not be bad to organize an informal meeting of the first ladies and gentlemen as part of the UN General Assembly in New York, because then all the influential people and those who solve problems are in New York.

That informal meeting of the first ladies and gentlemen, as Tamara Vučić says, would deal with the very things that the summit deals with, namely soft power, cultural diplomacy and humanitarian activities.

Tamara Vučić concluded her address with a traditional Ukrainian saying – “A warm word melts ice” with wishes to everyone that the spirit of Christmas and the New Year bring them primarily peace and well-being.