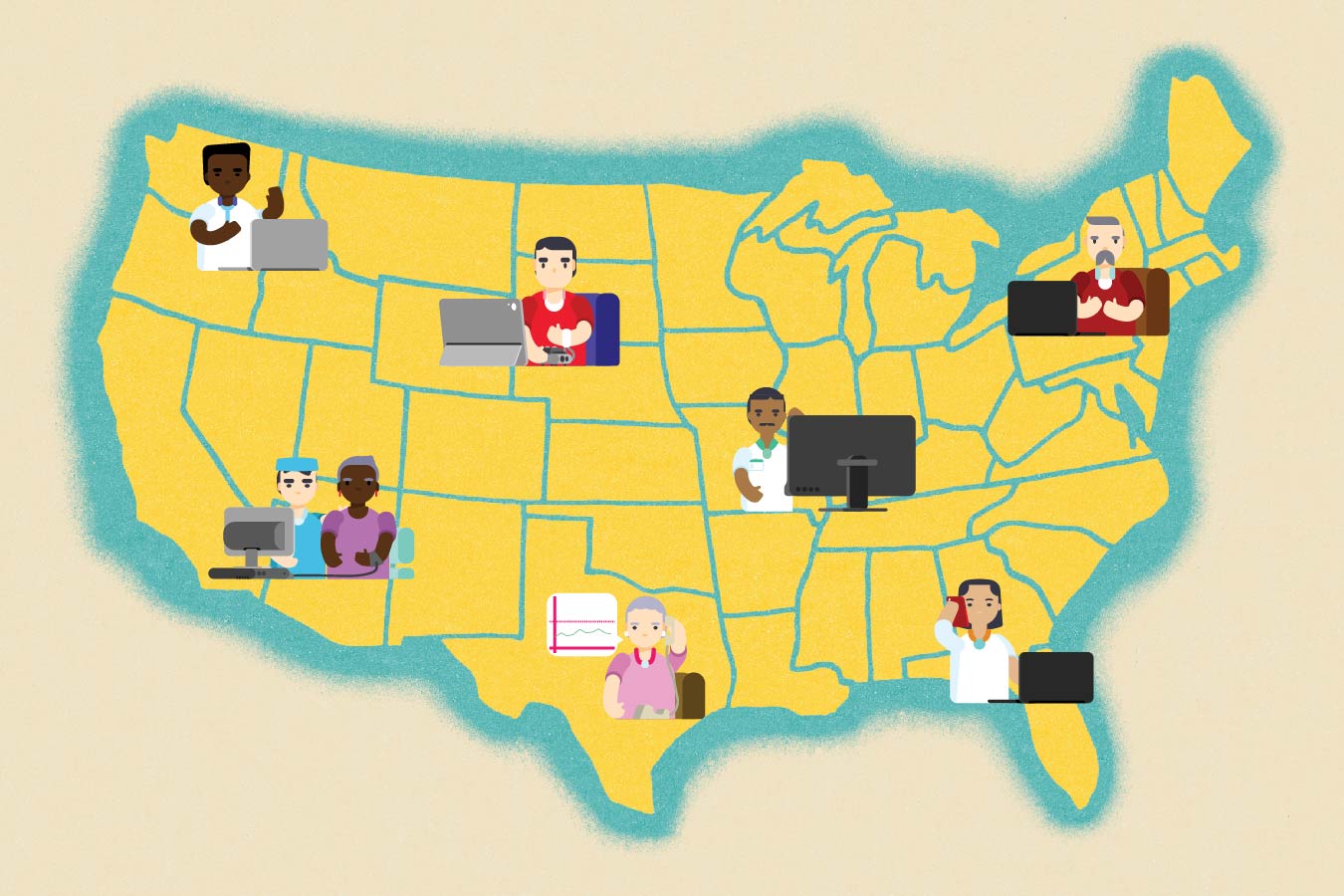 If you live in one state, does it matter that the doctor treating you online is in another? Surprisingly, the answer is yes, and the ability to conduct certain virtual appointments may be nearing an end.

Televisits for medical care took off during the worst days of the pandemic, quickly becoming commonplace. Most states and the Centers for Medicare & Medicaid Services temporarily waived rules requiring licensed clinicians to hold a valid license in the state where their patient is located. Those restrictions don’t keep patients from visiting doctors’ offices in other states, but problems could arise if those same patients used telemedicine.

Now states are rolling back many of those pandemic workarounds.

Johns Hopkins Medicine in Baltimore, for example, recently scrambled to notify more than 1,000 Virginia patients that their telehealth appointments were “no longer feasible,” said Dr. Brian Hasselfeld, medical director of digital health and telemedicine at Johns Hopkins. Virginia is among the states where the emergency orders are expiring or being rolled back.

At least 17 states still have waivers in effect, according to a tracker maintained by the Alliance for Connected Care, a lobbying group representing insurers, tech companies and pharmacies.

As those rules end, “it risks increasing barriers” to care, said Hasselfeld. Johns Hopkins, he added, hosted more than 1 million televisits, serving more than 330,000 unique patients, since the pandemic began. About 10% of those visits were from states where Johns Hopkins does not operate facilities.

The rollbacks come amid a longer and larger debate over states’ authority around medical licensing that the pandemic — with its widespread adoption of telehealth services — has put front and center.

“Consumers don’t know about these regulations, but if you all of a sudden pull the rug out from these services, you will definitely see a consumer backlash,” said Dr. Harry Greenspun, chief medical officer for the consultancy Guidehouse.

Still, finding a way forward pits high-powered stakeholders against one another, and consumers’ input is likely to be muted.

Providers have long been split on whether to change cross-state licensing rules. Different state requirements — along with fees — make it cumbersome and expensive for doctors, nurses and other clinicians to get licenses in multiple states, leading to calls for more flexibility. Even so, those efforts have faced pushback from within the profession, with opposition from other clinicians who fear the added competition that could come from telehealth could lead to losing patients or jobs.

“As with most things in medicine, it’s a bottom-line issue. The reason telehealth has been blocked across state lines for many years related fundamentally to physicians wanting to protect their own practices,” said Greenspun.

But the pandemic changed the equation.

Even though the initial spike in telehealth visits has eased, utilization remains 38 times higher than before the pandemic, attracting not only patients, but also venture capitalists seeking to join the hot business opportunity, according to a report from consulting firm McKinsey and Co.

Patients’ experience with televisits coupled with the growing interest by investors is focusing attention on this formerly inside-baseball issue of cross-state licensing.

Greenspun predicts consumers will ultimately drive the solution by “voting with their wallets,” aided by giant, consumer-focused retailers like Amazon and Walmart, both of which in recent months made forays into telemedicine.

In the short term, however, the focus is on both the protections and the barriers state regulations create.

“The whole challenge is to ensure maximum access to health while assuring quality,” said Barak Richman, a Duke University law professor, who said laws and policies haven’t been updated to reflect new technological realities partly because state boards want to hang onto their authority.

Patients and their doctors are getting creative, with some consumers simply driving across state lines, then making a Zoom call from their vehicle.

“It’s not ideal, but some patients say they are willing to drive a mile or two and sit in a parking lot in a private space and continue to get my care,” said Dr. Shabana Khan, director of telepsychiatry at NYU Langone Health’s department of child and adolescent psychiatry and a member of the American Psychiatric Association’s Telepsychiatry Committee. She and other practitioners ask their patients about their locations, mainly for safety reasons, but also to check that they are in-state.

Still, for some patients, driving to another state for an in-person or even a virtual appointment is not an option.

Khan worries about people whose care is interrupted by the changes, especially those reluctant to seek out new therapists or who cannot find any clinicians taking new patients.

Austin Smith hopes that doesn’t happen to him.

After initial treatment for what he calls a “weird flavor of cancer” didn’t help reduce his gastrointestinal stromal tumors, he searched out other experts, landing in a clinical trial. But it was in San Diego and the 28-year-old salesman lives in Phoenix.

Although he drives more than five hours each way every couple of months for treatment and to see his doctors, he does much of his other follow-up online. The only difference is “if I was in person, and I said I was hurting here, the doctor could poke me,” he said.

And if the rules change? He’ll make the drive. “I’ll do anything to beat this,” he said of his cancer.

But will doctors, whose patients have spent the past year or more growing comfortable with virtual visits, also be willing to take steps that could likely involve extra costs and red tape?

To get additional licenses, for instance, practitioners must submit applications in every state where their patients reside, each of which can take weeks or months to process. They must pay application fees and keep up with a range of requirements such as continuing education, which vary by state.

States say their traditional role as overseer ensures that all applicants meet educational requirements and pass background checks. They also investigate complaints and argue there’s an advantage to keeping local officials in charge.

“It’s closer to home,” said Lisa Robin, chief advocacy officer with the Federation of State Medical Boards. “There’s a remedy for residents of the state with their own state officials.”

Doctor groups such as the American Medical Association agree.

Allowing a change that doesn’t put centralized authority in a patient’s home state would raise “serious enforcement issues as states do not have interstate policing authority and cannot investigate incidents that happen in another state,” said then-AMA President-elect Jack Resneck during a congressional hearing in March.

But others want more flexibility and say it can be done safely.

Hasselfeld, at Johns Hopkins, said there is precedent for easing multistate licensing requirements. The Department of Veterans Affairs, for example, allows medical staffers who are properly licensed in at least one state to treat patients in any VA facility.

The Alliance for Connected Care and other advocates are pushing states to extend their pandemic rules. A few have done so. Arizona, for example, made permanent the rules allowing out-of-state medical providers to practice telemedicine for Arizona residents, as long as they register with the state and their home-state license is in good standing. Connecticut’s similar rules have now been stretched until June 2023.

The alliance and others also back legislation stalled in Congress that would temporarily allow medical professionals licensed in one state to treat — either in person or via televisits — patients in any other state.

Because such fixes are controversial, voluntary interstate pacts have gained attention. Several already exist: one each for nurses, doctors, physical therapists and psychologists. Proponents say they are a simple way to ensure state boards retain authority and high standards, while making it easier for licensed medical professionals to expand their geographic range.

The nurses’ compact, enacted by 37 states and Guam, allows registered nurses with a valid license in one state to have it recognized by all the others in the pact.

A different kind of model is the Interstate Physician Licensure Compact, which has been enacted by 33 states, plus the District of Columbia and Guam, and has issued more than 21,000 licenses since it began in 2017, said Robin, of the Federation of State Medical Boards.

While it speeds the paperwork process, it does not eliminate the cost of applying for licenses in each state.

The compact simplifies the process by having the applicant physician’s home state confirm his or her eligibility and perform a criminal background check. If the applicant is eligible, the home state sends a letter of qualification to the new state, which then issues a license, Robin said. Physicians must meet all rules and laws in each state, such as requirements for continuing medical education. Additionally, they cannot have a history of disciplinary actions or currently be under investigation.

Such compacts — especially if they are bolstered by new legislation at the federal level — could help the advances in telehealth made during the pandemic stick around for good, expanding access to care for both mental health services and medical care across the U.S. “What’s at stake if we get this right,” said Richman at Duke, “is making sure we have an innovative marketplace that fully uses virtual technology and a regulatory system that encourages competition and quality.”

Delta Cutting ‘Like a Buzzsaw’ Through Oregon-California Border Counties

Shameful: Garbage “boils” near the bust of Albright in Pristina [Foto] – Latest news