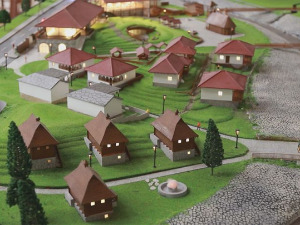 On the construction site of the “Serbian Village” complex, buildings are springing up that will present traditional village architecture from Vojvodina to the south of Serbia in one place. Because of this project, Nemanja Gajić decided to return from Belgrade to Kosjerić.

“It is necessary to simply create an atmosphere where young people will want to stay here or, if they are studying, to return to start a family here.” I am one of those who was attracted to this story. Despite this story, I realized that simply surviving in a big city is not easy. That value system that was imposed there was something that I did not agree with. So I think I made the right move,” says Nemanja Gajić, manager of “Serbian Village”.

“Significant results have been achieved in the tourist offer, but the ‘Serbian Village’ complex itself is of strategic importance. So, a total of 75 people, for a municipality this small. The employment of these young people is of enormous importance. Then, just arranging the bed of the Skrapež river and regulating the flow is also of great importance,” emphasizes Gordana Gvozdenović, head of the Kosjerić municipal administration.

And under the watchful eye of engineer Gradimir, the “Serbian Village” is also being built by Turkish builders.

“To speed up, according to some dynamics, that the objects that have been started are finished on time.” But the Turks as workers are good, they do quality work,” says B.Sc. Eng. Gradimir Jeremić, construction site manager.

The Turkish builders in Kosjerić encountered hospitality they never remembered. That’s why the “Serbian Village” sprouts in such a good mood, a complex that will be unique in the Balkans in many respects.