The nearer the massive corridors are to us, the higher for us 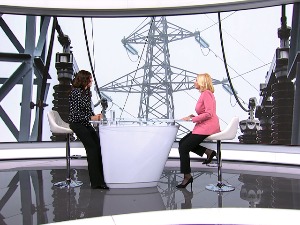 EMS director Jelena Matejić, in a guest appearance on RTS’s Dnevnik, said that everything is ready if, with the announced cold weather, there are problems with power lines due to snow and ice.

“All emergency plans have been made, all activities and groups of people are ready in case it gets cold. We hate temperatures close to zero the most, because around five degrees below zero ice forms on the conductors, but we are ready for it. All kinds of misfortunes are possible, but we claim that if something happens, everything will be removed in record time,” says Jelena Matejić.

She also spoke about the Trans-Balkan Corridor transmission project, which starts in Romania, goes through our country, and ends in Italy, connecting the Montenegrin and Italian shores of the Adriatic with a submarine cable.

Serbia is part of that project worth over two hundred million euros, and the director of EMS says that the second phase has been successfully completed, and that two more phases are to come.

It is a project of national, but also transnational importance.

“In addition to donations and loans, we have also provided funds for the implementation of the third section – from Obrenovac to Bajina Bašta, it should be completed by the first quarter of 2024, in operation, and the last section in 2027. These are incredible lengths, we are going through difficult accessible zones. We have another benefit, we are changing the 220 kW voltage network, which, in addition to lagging behind the new 400-kilowatt network, is also old, the benefit will be multiple,” said Matejić.

He points out that this project is very important for Brussels as part of a wider area in relation to the Trans-Balkan Corridor.

“It is connected to a cable that goes from Italy to the Montenegrin coastal part, it is under the Adriatic Sea, then it continues as an overhead transmission network to the border with Serbia. It crosses the territory of Serbia and connects with Romania, with further influence on Ukraine and Moldova. It is about achieving large transnational additional capacities in the power grid, which means faster, better, more stable and better quality electricity in that regional sense,” says Jelena Matejić.

For us, he points out, that means – more high-quality electricity, available at any moment.

“Greater opportunities for the evacuation and integration of renewable energy sources, especially from the Vojvodina and Banat regions. Further expansion and further potential in Montenegro. Let’s not forget Bistrica, it is a necessary condition for the connection of a new hydroelectric power plant, reversible, which is often mentioned these days.” says the EMS director.

Electricity from Azerbaijan is also important for the EU, but also for Serbia, which was discussed in the past period, and other connections are also being worked on.

“This is the pre-investment phase of a development project supported by the EU… This project has not yet reached Serbia. In the first quarter of this year, it should be included in the ten-year plans of the transmission systems of Europe… The main goal of this project is to connect the Azerbaijani and Georgian markets with the market of continental Europe via Romania. It is a cable similar to the cable under the Adriatic Sea, a slightly longer route, with a depth of 2.2 kilometers under the sea… It is in that predictable phase, and it needs to show through a feasibility study and some environmental impact studies the direction of the implementation. There are over two billion euros in the story, four countries that, in addition to the EU, directly support the development of this project – Hungary, Romania, Georgia, Azerbaijan,” explains Jelena Matejić.

He points out that Serbia looks forward to any project like this because the closer we are to new amounts of electricity and new large corridors, the better for us.

The director of EMS also spoke about balancing, which is necessary to ensure more green megawatts.

“Our country has a production balance capacity, but it must be built in a coordinated manner and keep pace correlatively in relation to the new upcoming integrity of variable energy sources, such as solar and wind,” he points out.

Jelena Matejić notes that the goal of each country and the task that the Government has set for this year is to find a balanced solution for the optimal production mix that will enable the stable integration of all energy sources, and adds:

“But in sufficient quantities to ensure the independent, further development of all other areas of our country and the independence of our state and the energy system from what used to be available, but turned out to be poorly available or even unavailable energy sources.”

In the last few years, EMS has been expanding its operations, it has bought a 15 percent share in the transmission system of Montenegro, and the director of that company is announcing new investment and development projects.