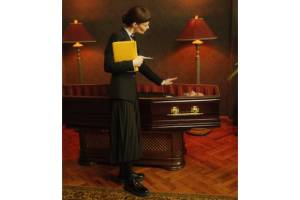 The psychological suspense thriller, inspired by Mitchell’s short film of the same title and shot by the Serbian DoP Igor Marović, is a twisted tale of a lonely mortician and her macabre quest for the perfect family.

The script was written by Dominic Brunt and the cast includes Rebecca Calder, James Fleet and Sacharissa Claxton.

Sybil is produced by Holly Levow through Catalyst Studio and it was shot on locations in Serbia from November till 19 December 2022. The services were provided by the Serbian branch of Catalyst Studio.

The nearer the massive corridors are to us, the higher for us