Two objectives by Darko Lazović for the victory of Verona, Atalanta higher than Bologna 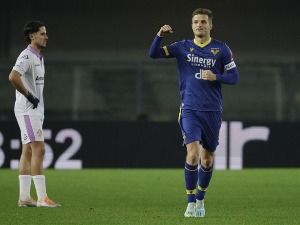 Lazović marked a duel between teams in the relegation zone.

The member of the “eagles” in Qatar was the only scorer in the match, scoring both goals in the first half.

He handled himself well in the “five” and turned the ball thrown in by Yaya Kalon into Verona’s advantage on the scoreboard with a shot from the turn.

The footballer who went to Europe from Crvena Zvezda already scored the second goal in the 26th minute.

Verona got their first win after 11 games. They previously drew with Torino, and before that they had an infamous 10-game losing streak.

As for the standings, Verona and Cremonese have swapped places. The defeated guests are last with seven points, while the host Verona is tied with Sampdoria with nine points.

Verona’s rival in the next round is Inter, who drew with Monza.

After a turnaround in the second half, Atalanta defeated the host Bologna.

Bologna quickly took the lead, Osolin shook the home team’s net in the 6th minute. There was no change in the score until halftime.

Already two minutes after the resumption of the match, in the 47th minute, Kopminers leveled the score at 1:1. The visitors’ offensive game paid off again in the 58th minute when Dane Hojland scored the final score of the match.