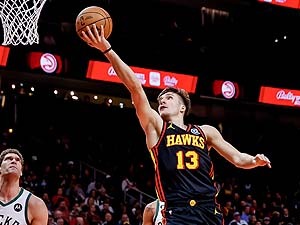 On their home field, Chicago won their third victory in a row without much uncertainty and reached the sixth position in the table in the fight for the playoffs.

They took the initiative from the start and already at the end of the half they had an advantage that they maintained until the final victory without any uncertainty.

They were led in efficiency by Demar Derozan, for whom this match was specific because it was his thousandth match in the strongest league in the world, joining the group of only ten players with such performance.

On the other side, in the Atlanta team, Trey Young was the most effective with 21 points, and Serbian international Bogdan Bogdanović scored 11 points with 1 rebound and 4 assists in 32 minutes of play.

The Orlando team was also safe on their field, beating the leading Boston team 113:98, although the guests were considered favorites and were expected to continue their nine-game winning streak.

The home team already had a 14-point advantage at the beginning of the second quarter, but Boston managed to get back into the game, mostly thanks to the excellent efficiency of Tatum and Brown.

Tatum was injured in the third quarter and had to leave the field, and Orlando again took the lead, which it did not let go until the end of the match.

Brown and Tatum scored 26 points each, but it was not enough against Orlando’s excellent team play.

First of all, the cheerful rookie Paolo Bunchero, who scored 23 points, followed by Carter with 21, Anthony with 18 and Wagner with 15 points.