We confirmed that we’re not followers of the outcomes, however of Partizan 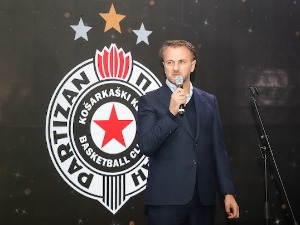 On Thursday, Partizan’s basketball players will play the 15th round of the Euroleague against Fenerbahce, and until the end of the season, important matches await them. Despite that, Belgrade’s black and whites took the opportunity to throw a New Year’s cocktail.

The president of the club, Ostoja Mijailović, spoke at the mentioned ceremony, referring to the matches and events in the current season.

“The most significant thing that happened is that after nine years we played in the Euroleague, and on this occasion I want to thank, first of all, our fans who gave us huge support by buying season tickets, where we managed to break all the records of the Euroleague,” Mihailović said. .

The first man of the Partizan Basketball Club continued with words about the recent series of bad results.

“We had the situation, in the last month, to call them a series of bad results, regardless of the overall struggle of Željko and the players. We showed the whole of Europe that we are not fans of results, but fans of Partizan. That we supported the team regardless of the situation we had where we unfortunately lost games. That’s what makes us different from the others. Even when we’re losing, we’re there just as much as when we’re winning,” said the Partizan president.

Mijailović continued about the next season, as well as the club’s plans for the future.

“Partizan showed how great it is in the Euroleague and from this place I want to send a message to everyone that, regardless of all the attacks we have from various sides, we are unique and we will fight as hard as we can so that Partizan achieves results this season. Our the main goal is to create continuity of playing in the Euroleague. I wish good health to the players and Željko, to continue fighting for our Partizan, to thank our sponsors and everyone for giving us strong support,” concluded the president of KK Partizan Ostoja Mijailović.