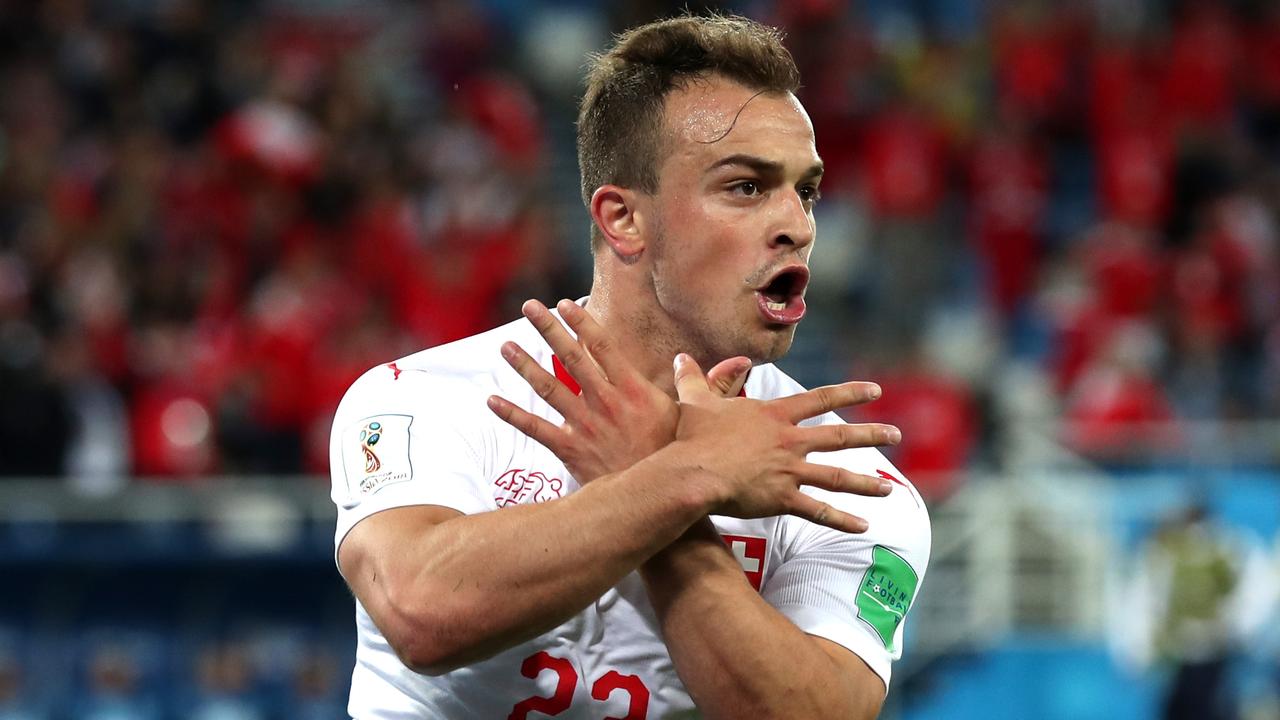 SWISS coach Vladimir Petkovic was not impressed when two of his players celebrated their goals with political gestures insisting that they should never mix with football.

GRANIT Xhaka and Xherdan Shaqiri scored a goal in Switzerland’s 2-1 win at the World Cup against Serbia, celebrating both by representing a nationalist symbol of their ethnic Albanian heritage.

In the first come-from-back win of the tournament, Xhaka scored the 1-1 with a powerful shot from an overcrowded penalty in the 52nd minute.

Shaqiri added the others in added time after running past the Serbian defense. They both put their open hands together, their thumbs crossed and their fingers outstretched to create what looks like the double-headed eagle on the Albanian national flag.

The thumbs represent the heads of the two eagles, while the fingers look like feathers.

The gesture is likely to spark tension between Serb nationalists and ethnic Albanians.

Shaqiri was born in Kosovo, the former Serbian province that declared independence in 2008. Serbia does not recognize Kosovo’s independence and relations between the two countries remain tense.

Xhaka’s parents are originally from Kosovo and are of Albanian descent.

Aleksandar Mitrovic headed for Serbia in the fifth minute.

Although the win puts Switzerland in pole position to get out of a difficult group with five-time winners Brazil, Petkovic was unfazed by the joy of his players.

“You should never mix politics and football, it’s good to be a fan and to show respect,” he told reporters after the game.

“It is clear that emotions are surfacing. I think that on and off the pitch we have to move away from politics in football and should focus on this sport that connects people. ”

Shaqiri was relentlessly whistled by Serbian fans during a high-profile match, but the Stoke City striker had the final laugh with his final winning goal.

“In football you always have emotions and you can see what I’ve done and it’s just emotions,” he said of his controversial celebration.

Together with Bologna’s Blerim Dzemaili, who was born in neighboring Macedonia, Albanian-speaking players made up more than a third of the starting XI against Brazil.

The children of immigrants to Switzerland did not comment before the game against Serbia, which ended 2-1 in their favor.

Before the game, relatives of the players made no secret of the symbolic meaning of the game as seen from the Kosovar capital Pristina.

For Valon Behrami’s uncle Qaush, his nephew will have “special motivation to win” because his parents suffered from the Serbian province of Kosovo.

“They both lost their jobs and their father was persecuted,” said Qaush Behrami.

Xhaka said the father of his cousin Granit was imprisoned during the regime of the late Serbian strongman Slobodan Milosevic and the “family emigrated after his release”.

Like dozens of thousands of others, the families of Behrami, Xhaka and Shaqiri fled to Switzerland during the 1998-1999 war between the Kosovar-Albanian pro-independence guerrillas and Serbian armed forces.

There are no official figures, but an estimated 200,000 Kosovar Albanians live in Switzerland, a remarkable number compared to the 1.8 million inhabitants of Kosovo.

Together with the community living in Germany, they represent one of the main sources of income for Kosovo and return around 175 million francs (152 million euros, 176 million dollars) annually.

This emigration goes back to the time before the war in Kosovo.

Kosovar Prime Minister Ramush Haradinaj also lived in Switzerland and worked as a bouncer and karate teacher before returning to Kosovo and becoming one of the pro-independence guerrilla leaders.

The last conflict that accompanied the collapse of Yugoslavia claimed around 13,500 lives. More than 10,000 of the victims were Kosovar Albanians.

The war ended when the NATO bombing raids forced Milosevic to withdraw his troops. Less than a decade later, Kosovo declared its independence in 2008. Belgrade still refuses to recognize the declaration and is supported by its traditional ally Russia.

Belgrade is also making great efforts to prevent Kosovar teams from participating in international sporting events, albeit with decreasing success.

Kosovo was officially recognized by the International Olympic Committee in 2014 and two years later it was accepted into the European football association UEFA and the global association FIFA.

But in May, Serbia prevented the Kosovar karate squad from entering the European Championship in Novi Sad.

No wonder that Kosovo is cheering Switzerland on.

“The whole of Kosovo will be in front of the television screens and cheer for the victory against Serbia,” the 46-year-old teacher Daut Maloku told AFP.

“When Switzerland plays, it’s the same as in Kosovo,” assured Qahil Halili.

“Switzerland is the third squad we have after Kosovo and Albania,” said Halili, a community worker from Zhegra, where Shaqiri was born.

A hamlet in the east of Kosovo is called “Little Switzerland” because 450 families have relatives there.

“The fans here will enjoy a Swiss victory more than the Swiss themselves,” said sports journalist Shkumbin Sekiraqa.