4 candidates for prime minister, the common wage by the tip of the 12 months is greater than 710 euros 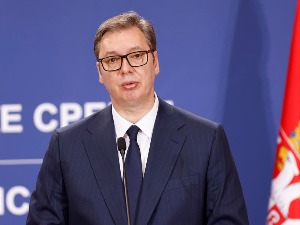 President Aleksandar Vucic said tonight that a large part of the new Government of Serbia will be made up of some other people, compared to its current members, and that there are four candidates for Prime Minister.

When asked whether some ministers will remain in the government, Vučić replied that some will, but that a good number will not.

“I would not like to bid, but a large part of the new government will be some other people,” Vučić told TV Pink.

He also stated that there are four candidates for prime minister, of which, he says, it is completely clear who they are, while two names have not been speculated about in the public until now, because he did not talk about them.

When the media speculated that Ana Brnabić, Siniša Mali, Marko Đurić and Miloš Vučević could become the head of the government, Vučić said that “she mentioned two of those four candidates”, adding that he is also looking a little wider.

Commenting on the upcoming period, Vučić said that Serbia has a good gas price agreed with the Russians and that “in the worst case, in the winter, in the event of a world war, two thirds of the needs will be covered”.

He said that Serbia has reserves of diesel for 77 days and gasoline for 65 days.

In case of problems with NIS, Vučić said that an agreement will be made on temporary takeover, because “we are not kidnapping anyone”.

Vučić announced that, in agreement with the Social Council, they will try to make the minimum wage 40,000 dinars, and the average wage around 710-720 euros.

He pointed out that he considers Serbia’s biggest mistake to have given up lithium mining, because that act “killed the future”.

As far as food is concerned, we will have problems with corn due to the drought, said Vučić and pointed out that “he is hoping for rain on Saturday, and then on July 27 and 28.”

Vučić announced that the government will adopt a decision at the session tomorrow that IVF will be accepted at the expense of the state for women, not until the 43rd year, but the 45th year.

“That’s great news for women in our country. That’s a lot of money, since it costs the state 260,000 dinars just for basic costs per attempt, millions of euros a year are involved,” Vučić pointed out.

Vučić said that the state made that decision because it is important for our country.

When it comes to the economic situation, Vučić says that Serbia keeps the public debt under control and added that it currently stands at 53.6, while the GDP this year will be between 58 and 59 billion euros.

“Our GDP this year will be between 58 and 59 billion, when I became prime minister it was 32.33 billion euros,” the president pointed out.

As he says, this year, a million people from Serbia will go abroad on vacation.

“I am happy that they have the money. First of all, I invite people to come, we only have 23,000 vouchers left, to spend part of their vacation in Serbia, we are doing something good for our country,” he said.

He points out that people have the right to go wherever they want and says that some people want to go to Montenegro, some to Turkey, Egypt, Spain, Italy, Croatia…

“Everyone has the right to choose wherever they want, and a much larger number of people are going this year than in previous years, which means that they live somewhat better. Expect that over a million people will go, on average it is not less than 1,000 euros, expect that we will leave a billion euros in abroad, although I think it is much more,” he says.

“I don’t see much sense in negotiations, but we will respond”

Speaking about the negotiations between Belgrade and Pristina, the President of Serbia said that no one had invited him to a new round of negotiations and added that he did not see much sense in those negotiations, but that our delegation would always respond.

“Nobody called me. They are trying something, I don’t know what. We are going to leave, but it doesn’t make much sense, they are preparing for action against the Serbs. Unfortunately, I think that the mood among the Serbs is very difficult and very bad. I am afraid, I will give everything of ourselves and we will do everything we can to preserve peace,” said Vučić on TV Pink, answering a question about the continuation of the dialogue between Belgrade and Pristina.

He stated that in 2012 we started the talks “with open hearts”, wanting a compromise with the Albanians.

“They tell us the Brussels agreement, our difficult concessions, but I knew what was going to happen. I knew that this would give us time to develop the country economically, but at the same time I knew that it would be the only agreement that we would be able to stick to days because I knew they wouldn’t fulfill it,” said Vučić.

He reminded that almost ten years have passed and added that they say that they will not fulfill the essence and the first six points out of a total of 15 with the transitional and final provisions of the points of the Brussels Agreement, and they call us to “harass us about the 15th annex of the sixth point of the fourth article of the third position regarding some kind of tables, even though it all works quite normally”.

He pointed out that everything boils down to the abolition of “KM” plates in order to abolish the north of Kosovo, and added that it is not a question of money or anything else, but a question of political provocation.

“That’s all they do. Why are you forcing us to participate in this? Let us try to keep the peace, don’t pretend to be naive and make fools of us. Maybe we’re not as smart as you are, both you in Pristina and you in Brussels, but we’re not exactly fools either,” said Vučić.

President Vučić assessed that this year, at the commemoration in Potočari, there was a stronger and fiercer campaign, more hatred directed towards the Serbian people, than last year and the year before last, and how he added more hatred from the media and political discourse concerning our responsibilities.

Vučić said that the date of commemoration of Srebrenica is a difficult day, the day of a gruesome crime committed against Bosniaks, and it is logical that it leaves such consequences even after 27 years.

“We have many difficult days in the year. There are many problems and many different views and many things that we would have to change,” he said.

Vučić said that, in the conditions of an almost world war, since the entire Western world is at war with the Russians through the Ukrainians, there are major changes and that the situation in our area is not simple.

“It seems that everyone in the Balkans is waiting for the second half, with a lot of passion, emotions and hatred. We are the ones who have to avoid it at all costs”, he pointed out, noting that we have to avoid it, but not because we are weaker than any who.

Vučić also drew attention to the crimes against Serbs that no one is talking about, asking why this is happening.

“I didn’t go to Srebrenica because I wasn’t welcome, I kept silent on July 11 because whatever I said, Serbia would be exposed to the most brutal attacks because I didn’t say the magic word they want to hear, because someone doesn’t want us to see respect for the victims, but a legal formulation so that he could base some other moves on that in the future, which is the abolition of Republika Srpska,” Vučić pointed out.

Vučić: It is up to us to keep the peace

Commenting on the events in the region and the region’s interest in Serbia, Vučić said that “it is up to us to keep the peace, but also to know about all the hypocrisy that surrounds us and that we are allowed to talk about it”.

Vučić pointed out that we must never cross a thin line that would lead us into conflicts.

“We need a century of peace”, the president points out, recalling everything that Serbia went through in the 20th century, from the murder of King Aleksandar Obrenović and Queen Draga Mašin, through the Balkan wars, the First World War, the murder of King Alexander in 1934, the Second World War until the conflict of the nineties and NATO aggression in 1999,” he noted.

As he says, he understands the obsession with Serbia, but Serbia must not turn a blind eye to other people’s victims, it must acknowledge, accept and respect them, but it must also talk about its own victims, not to hide them, not to be ashamed of them, but to speak for them. seeks justice.