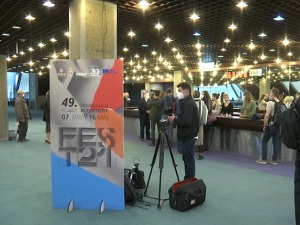 Fans of moving images gathered for the 49th time at the Sava Center at the same place where the last Fest, which was the last international film festival before the outbreak of the pandemic and the declaration of a state of emergency, was held a little over a year ago.

This edition of Fest is the first international film festival to be held in a cinema with the audience and guests and, it can be said, the first Fest under masks.

At the opening ceremony, first a minute of silence was given to all the victims of the coronavirus, and then the film greats were on the big screen, without whom we were left between the two Fests.

Traditionally, at the opening, “Belgrade Winners” were awarded for their outstanding contribution to film art. These are awards that were established by Jugoslav Pantelić when he took over the position of artistic director.

“I don’t think it’s necessary to explain too much why Puriša Đorđević and Rade Šerbedžija deserved the ‘Belgrade winner’ for their exceptional contribution to film art, just like Miljen Kljaković Kreka, who will receive the award at the closing of the Fest, when a film about his work will be shown. , which will practically close the 49th edition of the festival “, Pantelić pointed out.

According to him, it is a great pleasure for those who work at the Fest when they have meetings with those who painted all these years of the Belgrade International Film Festival.

City Secretary for Culture Ivan Karl assessed that Fest is a kind of return to cinemas.

“Especially after the decision of the Crisis Staff to increase the capacity in the ‘Sava’ Center, and that is an encouragement for the Fest, a wind in the back for all cultural institutions, our theaters, museums, galleries, cinemas. “If we continue immunization at this pace, and Serbia is one of the few countries where citizens can choose which vaccine to receive, then in the next few months, the slogan of the Fest Back to the Future can get full meaning,” said Karl.

Until May 16, while respecting epidemiological measures, enjoy quality films from the 49th Fest.

As is rare, Adrola introduces us to her mother