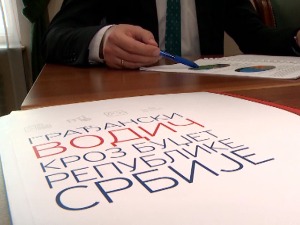 An extensive document of several hundred pages that describes in detail where the money from the budget goes, is summarized in the Citizens ‘Guide – a short presentation of the state on the most important items to make it completely clear to citizens how taxpayers’ money is spent.

State Secretary in the Ministry of Finance Sasa Stevanovic says that the Ministry wants to improve the transparency of the budget, ie to make it accessible to everyone, so that everyone can understand it.

“On the one hand, it is the citizens who fill the budget with their donations, ie give money to the state so that the state can finance those expenses, and we feel that it is our obligation to reach every citizen and know what is really there. in the budget “, says Stevanović.

Local self-governments are conducting a similar practice, so the Municipality of Kovin has already published its guide through the budget.

The head of the Department for Budget and Finance of the Municipality of Kovin, Biljana Stojković, says that the involvement of citizens is one of the most important things in the budget itself.

“The law requires us to make that budget in a certain way, and that is often incomprehensible. It is often incomprehensible for those who are in the budget process, and not for people who, as citizens, need to be informed about some basic things implemented by their local government. and to eventually find what interests them and, in the last resort, to engage, to see some of their rights in which way they can exercise and how much is set aside for certain things “, says Stojković.

The Citizens’ Budget Guide is compared in the Government with the plans of one household that has a clear financial plan.

“We have simplified it for next year, so they know exactly that the doctors they go to will have a higher salary by some 8 percent, also that our oldest fellow citizens will have a pension increase of 15.5 percent and another 20,000 dinars, say in February, then we You know that we are currently building ten highways, it directly affects the quality of life of our citizens, then we have stated the amounts, ie what we will invest in when it comes to education, “says Stevanovic.

And in order for the Civic Guide to reach those who do not have the Internet through the budget, a printed version of that document has been provided, which the ministry will share at the events it organizes.

Public financial management is part of the overall public administration reform being implemented in Serbia with the continued support of the European Union.