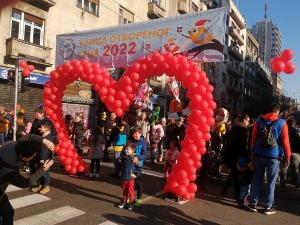 Open Heart Street has been a manifestation for more than half a century, and the people of Belgrade have longed for it, since it was not there last year.

The mayor of Belgrade, Zoran Radojicic, says for RTS that on New Year’s Eve it was cheerful, peaceful, without incidents, with respect for the measures, as expected.

“Our services also worked last night. About 1,500 people from the communal services are constantly on the street and the city is functioning primarily because of their work,” said Radojicic.

According to him, the fireworks in Belgrade showed on the one hand that Serbia is developing as a modern country, and that the City of Belgrade preserves traditions, such as Open Heart Street, and on the other hand takes care to be a modern, contemporary city.

“Through fireworks and that spectacle, we sent a picture to the whole world,” said Radojicic.

Today, the first two babies were born – a girl in Visegradska, and a boy in the Popular Front.

“We are starting the New Year with that beautiful news, we are looking forward to it and we want to have even more of us, because that is the only way we will have a bright future both as a city and as a country,” Radojicic pointed out.

He emphasizes that the city of Belgrade has a lot of plans for next year.

“Huge budget, 160 billion. All projects that will be done in Belgrade will have a component of environmental protection. There will be other large projects. We will have a line park, ambulance will be upgraded, Ninth Belgrade Gymnasium, Kalenić market, we will do a lot in this years “, notes Radojicic.

Many municipalities in Belgrade will have their own streets with an open heart.

The chief considers the primary 12 months of governing profitable, the opposition calls it incompetent