A fireplace is being extinguished in an inaccessible half close to Mali Zvornik, throughout the substitute of burnt flags 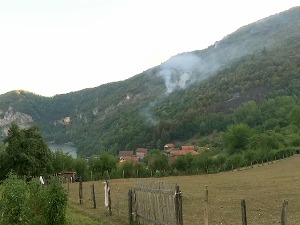 Firefighters were on duty during the night, and extinguishing the fire is made difficult by the wind and inaccessible terrain.

The RTS correspondent reports that the fire broke out near the houses above Lake Zvornik. One of the locals says that everything was on fire, and that everyone who could helped put out the fire.

Assistant to the head of the Administration for Fire Rescue Units and Civil Protection Saša Rančić tells RTS that the situation is under control as of last night.

“All buildings, all households and auxiliary buildings have been defended. We are currently working on localizing the fire in that inaccessible part where we will need a little more physical strength and manpower,” said Rančić.

He adds that fire crews will remain on duty the following night, and that, if necessary, helicopters will also be involved in the action.

“There is no need for now. Otherwise, it is a great physical effort for the firefighters,” says Rančić.

He appeals to citizens to use fire in open spaces as little as possible due to weather conditions.

Elektrodistribucija crews are replacing poles that have burned, and a small part of the villagers in the village do not have electricity.