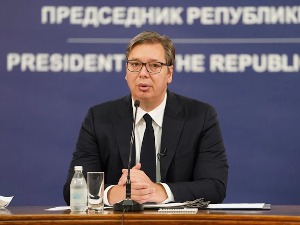 Aleksandar Vučić said that yesterday, at the meeting with the Prime Minister Ana Brnabić and the Minister Siniša Mali, a decision was made on the payment of additional aid to the citizens.

“We expect to have a surplus of 200 million euros in July, we have made a decision to give the citizens another 20 euros in December,” the president pointed out on Pink television.

Vučić said that he has money and that he wants consumption to be additionally encouraged.

“We want to give people the opportunity to spend more in their country, so we went with a larger amount of vouchers for people to spend money in Serbia,” the president noted.

Vučić also said that he was preparing a big surprise for pensioners from next year with Brnabić and Mali. “I think people will be very, very satisfied,” the president pointed out.

“Proposal to give parents 5,000 euros for the birth of a child”

The president announced that Serbia will be the strongest country in Europe in terms of birth stimulation rates.

“We will make many things easier for pregnant women and mothers-in-law, and we will also go with a large and significant increase in the amount for giving birth to children – for the first, second, third and fourth child,” Vucic pointed out.

He stated that his proposal to the Government was to give parents 5,000 euros for the birth of a child.

According to him, new measures are necessary because the birth rate is inversely proportional to the growth of living standards, and he stated that he has already received specific proposals from the Minister of Family Care and Demography, Ratko Dmitrović.

As for the case of little Gavril, he says that he had to intervene, because 370,000 euros were provided, and the problem arose due to the procedure.

He also announced that a new model of legalization of facilities is being prepared, which will be simple for both the state and the citizens, but he noted that he cannot talk about the details yet.

“It is important to build friendly and fraternal relations with Bosniaks”

Vučić referred to the departure of Valentin Inzko from the position of High Representative in Bosnia and Herzegovina and his decision by which he amended the Criminal Code, which punishes the denial of genocide.

The President mentioned that he was not a supporter of the imposed decisions, because they never brought anything good, but only greater divisions.

He stated that he has not yet received an analysis from our legal experts, but he pointed out that it is important that Serbia always shows respect for the Srebrenica victims at all times.

“It is important to build friendly and fraternal relations with Bosniaks in the future,” the president said.

“We are not interested in other people’s borders, only the position of our people”

As for the accusations in the Croatian media for Greater Serbia nationalism, he pointed out that Serbia’s policy is to preserve its borders, recognized by the United Nations, and nothing more.

The President announced that this year, in five months, Serbia will, for the first time, threaten Croatia in terms of GDP in absolute terms, since at the end of 2021, it will have a GDP worth 51 billion euros.

“I haven’t seen Belivuk, we will deal fiercely with drug dealers”

Regarding the claims of the leader of the organized criminal group, Veljko Belivuk, published by Krik about alleged connections with him, Vučić reiterated that he had never seen or heard of Veljko Belivuk or Marko Miljković.

He pointed out that he was ready to come to the polygraph in public and answer whether he had ever seen or heard Belivuk, Miljković or any of the people who were arrested.

“I don’t have a problem with that, I’ve never heard or seen Belivuk. It wouldn’t be a problem if I did. It’s not a crime to see someone in 2014, 2015, 2016, 2017. It happened by chance that I didn’t. When I say accidentally , I am in contact with a million people, I went to the management of Partizan, the management of Zvezda and it would be most normal if I did, but by chance I did not, “Vučić pointed out.

He said that the state will clean drugs and drug dealers so fast that “you will see the price of drugs rising, no matter how much they flooded it with old goods, because there will be less and less of it.”

“We will deal so fiercely with drug dealers, that you will see very well what it looks like, there is none here, sorry, there is no giving up,” the president said.

In addition to Majlinda in judo, two other athletes will compete in Kosovo tomorrow – Latest News