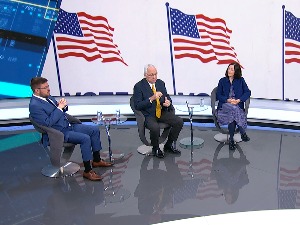 A possible Republican victory in the midterm elections could be the last sign former President Donald Trump is waiting for to announce his candidacy for the 2024 election. The candidacy itself and the possibility of defeating the current president, Joseph Biden, with a rather poor current rating, opens new cracks in American society, but, some believe, it would also have a huge impact on global politics.

On the other hand, there are not a few who believe that these elections are just a normal test of the current president’s “passing time” and that American politics, neither internal nor external, will change much.

“Nedeljnika” columnist Ljiljana Smajlović does not see why these American mid-term elections would be historic.

“The thesis that a vote for the Republicans will bring about the downfall of the country is being pushed. If the Republicans get the majority according to the old custom, the investigations of the members of the Senate from the ranks of that party will stop and retaliation will begin and an attempt will be made to expel the key people of the Democrats from the congressional committees, but the essential policy will not change.” , says Smajlović.

Ivan Vujačić, former ambassador of the FRY to the USA and a professor at the Faculty of Economics and the Faculty of Political Sciences of the University of Belgrade, emphasizes that by-elections in the USA are a routine matter.

It indicates that, as a rule, fewer voters vote in them compared to the presidential ones, as well as that 36 of the last 40 by-elections were lost by the party from which the current president is.

“It is more about challenging Biden’s victory in 2020 by Trump, which has not been seen before. If all the Republican candidates for prosecutors and governors in various federal states came to office and challenged the re-election of Biden. It would be routine that everything if this it doesn’t happen,” explains Vujacic.

Predrag Rajić from the Center for Social Stability believes that it would be a miracle if the Democrats retain the majority in Congress. “It will be a warning to them and an incentive for Trump to announce his presidential candidacy for 2024”.

He believes that in case of victory of the Republicans, the policy towards Ukraine will not change.

“Since the beginning of the war in Ukraine, all resolutions regarding aid to Ukraine and sanctions against Russia have been passed jointly with the Democrats. Maybe the Republicans will slow down a bit more and talk more.” The bottom line, according to Rajić, is that neoconservatives among Republicans are even more prone to interventionism than Democrats. He adds that it is possible that we will see more radical decisions on this issue.

Vujacic emphasizes that the American president is sovereign in conducting foreign policy, adding that the Republicans do not dispute it.

Ljiljana Smajlović reminds that in 2016, when Trump became president, there were no changes in the State Department during the first two years of his mandate. “The policy towards this part of the world did not change until the appearance of Richard Grenell and his return from the post of ambassador to Germany”.

He agrees with the interlocutors that the Republicans would be even more radical in foreign policy.

“When it comes to Ukraine, ‘Republicans are bigger crusaders than Democrats’. It is enough for someone in Iran to shout ‘death to America’, they would immediately want to go to war with Tehran. When they say that ‘Biden will not get a blank check from us for Ukraine’, we should remember 2006 when the Democrats won the majority, and the following year they voted George Bush the largest war budget,” says Smajlović.

He emphasizes that, according to the Gallup survey, foreign policy is in the second place of US citizens. “It turned out that the main topics are inflation, education, abortion, and not Ukraine, China and foreign policy topics. These elections are being watched in the world because there is fear of Trump’s return to power,” adds the “Nedeljnik” columnist.

What could happen if the Republicans get the majority, Vujacic illustrates with a joke that Congress does nothing and then overreacts. “What the Republicans can do is to vote to suspend the funding of the administration, but that can turn against them, that the public sees them as those who work against the country,” adds Vujacic.

Rajić says that nothing has been regular in US politics since 2016, when an unprofessional politician became president.

“Against Trump in the Republican Party are the neoconservatives who are aware that without him there is no victory. Trump brought new voters, disappointed with the Democrats. The question is whether the two currents can unite,” Rajić emphasizes.

Vujacic says that the Democrats currently do not have a better candidate for the 2024 elections than Biden, but that both Trump and Biden have a low rating among the American public.

What would happen to the dialogue between Belgrade and Pristina?

When asked if Belgrade and Pristina would get more time for a final agreement with the victory of the Republicans, Smajlović says that she does not expect anything to change, which Vujačić also agrees with, at least not in the next two years.

“Europe is leading the Brussels process, and the Americans can only press and push when something needs to be signed”, states the former ambassador of Serbia to the USA.

Rajić points out that if Biden were to be re-elected since it would be his last mandate, perhaps a turnaround could be expected.

He emphasizes that Serbia has a respectable caucus in the Congress, including Republicans and Democrats.

It seems to Vujačić that Serbia has already “played” the republicans, and both parties are present in the caucus. “It is not a lobbying group, but those who will see and present our side with understanding,” concludes Vujacic.