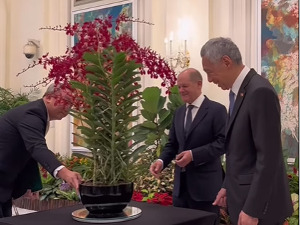 An exotic bright red orchid is now named after a politician from Germany. The impressive plant with its fine flowers was christened Renanthera Olaf Scholz during Scholz’s visit to Singapore.

Renantera has many flowers and loves light. The plant is bright red, like the color of the chancellor’s SPD party.

At a ceremony at the official residence of host Prime Minister Lee Hsien Loong, Scholz received a specimen of the orchid with a matching name tag.

“I didn’t become a politician to have a plant named after me, to be honest.” “But I still feel honored,” Scholz said.

The orchid is the national plant of Singapore. In the Southeast Asian city-state, it is customary to name an orchid after officials who are on state visits. For this purpose, two varieties of this plant are usually crossed.

These are not the first orchids to be named after German statesmen. Dendrobium Angela Merkel was named in honor of former Chancellor Merkel, and Dendrobium Frank-Walter Steinmeier after the current President Steinmeier.

In the past, Singapore has already named tropical plants after Princess Diana, Margaret Thatcher and Japan’s Emperor Akihito, among others. This honor is also called “orchid diplomacy” in the economic metropolis.