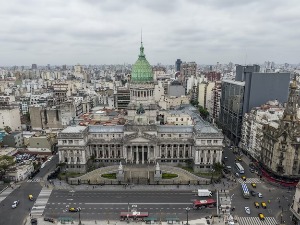 The sentences handed down by a federal court in Buenos Aires include convictions for enforced disappearances, murder, torture, child abduction, crimes committed against some 350 victims during the military regime that ruled the country between 1976 and 1983.

Human rights groups say that 30,000 people disappeared during that period, although determining the precise numbers is still a matter of debate, reports Reuters.

Former General Santiago Riveros, previously convicted in other proceedings for human rights violations, is among those convicted.

Riveros was sentenced to life in prison after being found guilty of more than a hundred crimes, including kidnapping, rape and murder, according to the verdict.

The convictions included allegations that military forces, with the support of company executives, kidnapped seven workers at the Mercedes Benz factory in the suburbs of Buenos Aires, beginning in 1976.

According to the charges, according to Reuters, the executives complained to military authorities that the abducted employees were either union members or that they were seeking to organize workers.

The kidnapped workers were taken to the infamous Campo de Mayo military compound, a secret facility that functioned as a camp, and six of them are officially missing, although all are presumed dead, the agency reports.

Almost 6,000 detainees are believed to have passed through Campo de Mayo, which is located not far from Buenos Aires, and many of them are classified as missing.

Reuters reports that a local Mercedes Benz representative did not immediately respond to the agency’s request for comment.