As the issue of the landslide in Kolubara is being solved, the minister warns of much less coal manufacturing 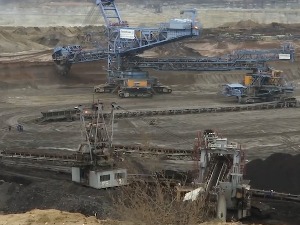 The landslide triggered 300 cubic meters of earth on “Field E” which is stopped the work of the main “Rodent 7” and the conveyor that is part of the system. After a difficult night, the smaller machine was cleaned, and the excavator will be repaired and ready for further repairs by tomorrow.

“There is no major damage to vital parts. By the way, we planned to stop ‘rodent 7’, the excavator that is endangered, on Friday, for repairs to take seven to ten days,” says Vladan Radovanović, assistant director of Kolubara Mine. for production.

The Minister of Mining and Energy, who visited Kolubara last night, says that the landslide is under surveillance and that work is being done to protect the substation that supplies electricity to the mine.

“The electricity supply, as well as the thermal energy of Lazarevac and the surrounding areas, will not be threatened,” said Dubravka Đedović, Minister of Mining and Energy.

The damaged dredger provides about a quarter of the coal that Kolubara produces. In EPS, they claim that coal stocks are 5.4 percent higher than planned.

“The production of coal from the Kolubara Mining Basin will be reduced by 10 percent in the next three days, and from Friday I expect normal production of around 65,000 tons of coal per day. What the citizens of Serbia should know is that there are 1.48 million tons of coal in the EPS landfills “On TENT A and B, a couple of thousand, just under a million tons, which is rare for the end of January,” Radovanović points out.

Nevertheless, Minister Đedović warns of lower coal production, which can lead to problems.

“What worries me is that the production in Kolubara has been 30 percent lower in the last two weeks than a month ago and that with this accident it will be even lower. Which means that we have to work on larger quantities at coal dumps, stockpiles, so that our energy system and the supply of electricity to citizens came into question,” says Đedović.

EPS also assures that the electricity supply is safe and that they are exporting electricity throughout January. In the coming days, the export of seven to 10 million kilowatt-hours per day is planned.