Blue blood crabs die due to human medicine and vaccines 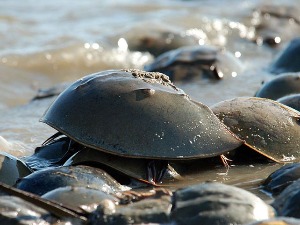 There are few organisms on the planet that are as strange and as old as the sea crab known as the horseshoe crab.

The fact that they were on Earth before the dinosaurs, at a time when everything was big, could explain their structure – helmet-shaped armor that can grow up to 50 centimeters.

They use tides to move. They are anatomically closer to spiders than crabs and glow under ultraviolet light.

However, their superpower, ie. the only characteristic is that their blood, which is light blue, clots when exposed to harmful bacterial endotoxins, a feature that keeps them alive for about 450 million years.

Bacterial endotoxins cause inflammation and fever and can cause anaphylactic shock and death. They cause sexually transmitted diseases, bacterial meningitis, as well as cholera, bubonic plague and other diseases.

The cells of the defense forces of the crab-horseshoe organism in the blood of this animal immobilize the mentioned type of endotoxin, making them inert.

It is both a blessing and a curse, because when scientists discovered this amazing defense system in the 1960s, we started using it for ourselves, hunting these sea creatures for their blood to test drugs, needles and biomedical devices to make sure that they are not polluted.

Their blood is so useful that it has enabled scientists to create vaccines that help people fight various diseases from migraines to melanoma, and recently coronavirus. All this is the reason why man has inflicted a huge blow on the population of these sea creatures.

Although science has created a problem, it may be able to solve it.

New technologies have made an artificial version of the blood of these cancers available to detect endotoxins. The question around which spears are broken is whether that blood is good enough for all that the real blue blood of crabs is used for. While some companies have already switched to testing products with synthetic blood, others are waiting for confirmation that the substance is a safe replacement.

The discussion divided conservation scientists and a committee that decides on scientific standards in the pharmaceutical industry, which believes more studies are needed before a synthetic version of crab blood could be introduced.

Last summer, as the coronavirus infection rate continued to rise, a group of researchers from the pharmaceutical companies Bristol Myers Squib, Pfizer and the biotechnology company Rosh-Genentek published the results of a study comparing two products, one from crab blood and others of synthetic blood.

The findings, however, did not help calm the debate.

Pharmaceutical companies must somehow ensure that drugs and medical devices and endoprostheses, such as artificial joints, do not contain endotoxins.

If pharmaceutical companies continue to rely solely on the blood of sea crabs, the population of these animals will be in serious danger.

This is not the first time that this type of cancer has faced potential extinction. In the 1990s, fishermen decimated the horseshoe crab population along the east coast of the United States, using them as bait to catch eels.

Prior to that, scientists along the Delaware Bay were able to find an average of 45,000 horseshoe crab eggs per square meter in approximately five centimeters of sand. Since 1995, that number has varied between 5,000 and 10,000.

About 500,000 crabs are taken out of the water and collected from beaches along the Atlantic coast each year to provide the required amount of blood for the pharmaceutical industry.

“Every candidate for a drug, vaccine, clinical trial or ready-made solution for injection into the body must undergo testing. The water and raw materials used must also be tested. So, this is a huge increase considering how much the company is now working on vaccines and drugs for covid, “said Kevin Williams, a scientist who works for” bioMerieux “, a French multinational biotechnology company.

Even before the coronavirus, the demand for blue crab blood was already growing.

“As things stand now, the entire supply chain for testing endotoxin drugs is based on hunting a vulnerable or almost extinct sea creature,” Williams emphasized.

The salvation for crabs lies in artificial blood

The American horseshoe crab is not considered endangered, although it is classified as vulnerable.

However, it is feared that, if overfishing continues, the species will go the way of the Asian horseshoe crab, which is already extinct in Taiwan, and is disappearing in Hong Kong and China.

Competent bodies and scientists are committed to finding ways to switch from animal to artificial materials, but it is necessary to provide irrefutable evidence that the two products have the same effect.

Jessica Ponder, an analyst with regulatory research at the Committee of Physicians for Responsible Medicine, says that the American cancer population is not on the edge at the moment, but that one should not rely on an animal, especially one that can only be found in one country.

“Open Balkan” fails that in the beginning, only Kosovo came to Albania’s aid – Latest News