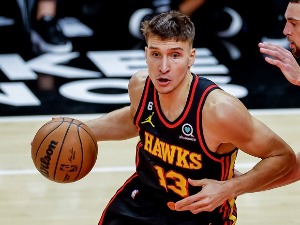 Atlanta led throughout the match, scored as many as 70 points in the first half, but slowed down a bit in the third quarter, which Miami used to get back into the match.

However, the guests did not manage to seriously threaten with a reversal, the Atlanta basketball players controlled the result and surely brought the match to an end.

In the home team, Dejonte Murray stood out with 28 points, while among the Miami players, Jimmy Butler was in the best mood with 34 points.

Serbian basketball player Bogdan Bogdanović had a modest role in his team’s victory – he scored eight points with five assists and two steals, in just over 30 minutes on the floor.

Bogdanovic made two three-pointers out of five attempts, but his two-point shot didn’t serve him – 0/6.