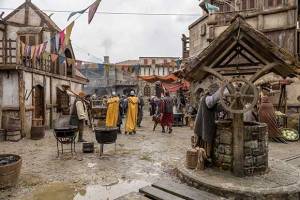 The fund will be an additional source of money for production in Serbia. Serbia already has a government-backed system that has proven effective in European cash discount programs. It offers 25% for qualified film and television productions and 30% for qualified Serbian spending on feature films with a budget of EUR 5 million and more. Balkanic Media produced two seasons of The Outpost on CW Channel and episodes of the third season of CBS’s Seal Team, both of which benefited from the Serbian cash discount.

The investment is the largest commitment of a single film financier for Serbia and the further development of the international film portfolio in the period after Covid-19. Head Gear was founded by Phil Hunt and Compton Ross and is known as an active provider of manufacturing services and debt financing for independent media projects. The Serbian fund will focus on television series, but will also be available for single image funding.

“I’ve always been interested in expanding into other areas, and this partnership with Balkanic will build on our growing television programming and continue to lay the foundation in other areas. I have known the Balkan partners Jonathan and James since the mid-1990s, so this is a perfect fit for a new company in Serbia. Said Hunt.

Balkanic Media is currently shooting the third season of The Outpost series at PFI Studios in Belgrade for Dean Devlins Electric Entertainment and Arrowstorm Entertainment. The company has also produced indie films The Deal (USA) and Serbia’s AI Rising / Ederlezi Rising, which were produced by Mir Media Group Beograd and Balkanic Media.

Police use weapons in the case of road ‘B’, two people are injured, one is in Emergency – Latest News

The earnings of the Russian oil firm Rosneft fall dramatically