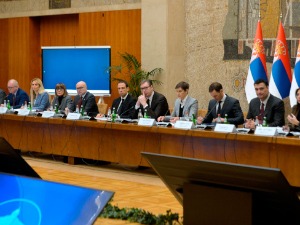 Bearing in mind the unfavorable indicators of the current energy and economic situation in the world, the session analyzed domestic and global trends with projections of economic growth for the current year and possibilities for maintaining the country’s financial stability, announced the Government of Serbia.

“At the meeting, it was said that good results were achieved in the fields of tourism, information technology and services, and that the measures taken to attract direct foreign investments in the previous year were a significant driver of the domestic economy and an additional incentive for the creation of new jobs,” it added. announcement.

Also, it is pointed out, the service sector played the role of the dominant driver of economic growth in the previous year.

When it comes to agriculture, the importance of investing in additional protection measures against natural disasters, primarily radar systems for hail defense, irrigation systems, field electrification, was underlined.

“A special emphasis was placed on additional incentives for animal husbandry, which in recent years has seen a declining trend. The relevant ministry will also work on revising the criteria for participation in the IPARD program so that a greater number of registered farms can apply for these European funds for agriculture,” it is stated. in the statement.

“One of the measures that the GDP Council will monitor during the year is the speed of issuing location conditions and building permits in order to release the full potential of private investments in Serbia,” the statement added.

It was concluded that further encouragement of dual education is extremely important, considering the needs of the domestic market and the fact that those who are educated according to this system find it easier to get a job and better paid jobs.