Building of the BIO4 campus will start subsequent 12 months 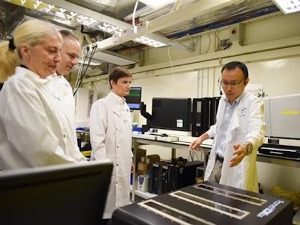 Ana Brnabić is the first lady during his stay in Singapore told journalists that she had heard a lot about the idea of ​​a biocampus from Minister Begović and the entire team that had been working on it for almost two years.

“It was very inspiring to see a campus like this, it is one of the first biotechnological campuses in the world and it was good to hear that we are on the right track. So this may be the final confirmation that we will now start issuing location conditions and already next year in construction of our BIO4 campus,” said the prime minister.

She estimated that it will mean a lot for Belgrade, for Serbia and for our science and economy, but, as she says, it is a very good sign that Serbia continues to move forward and that it can continue to build on the success achieved in digitalization. in the past five years.

“I expect that in the coming years it will bring us faster economic development, i.e. further wage growth, pension growth and a stronger Serbia,” concluded the Prime Minister.

Minister Begović, after visiting Biopolis in Singapore, said that when the idea of ​​building the Serbian Bio4 campus project was emerging, Biopolis was the guiding light.

She pointed out that she is very satisfied that what is planned to be built in Belgrade is a reflection of the very successful story of Biopolis.

“I think that the construction of the BIO4 campus is a strategic decision of the state and, I can say as a scientist, one of the best ideas we have had in the past few decades in terms of investment in science. We plan to start the construction of this campus sometime in August-September 2023 and the works are planned to last for about two years, which means that in 2025 we will get something completely new in science,” said the minister.

She pointed out that in Singapore there was very useful advice from people from Biopolis.

“If we do all that and put it into practice, I think that a very bright future awaits us in terms of biotechnology and the introduction of the concept of bioeconomy into the Serbian economy and Serbian society,” said the minister.

He adds that Biopolis, as far as biotechnology is concerned, has become very recognizable on a global level, but he says that it took them almost 20 years to reach this level.

“I believe that it is never too late and I believe that some things can be done faster, especially if we use experiences and some mistakes made by others,” Minister Begović concluded.