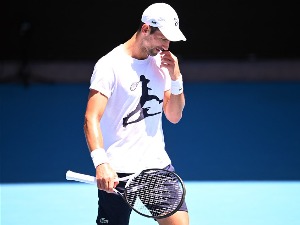 Djokovic didn’t practice even on Sunday because of the problem with the back of his left leg, which has been bothering the Serbian tennis player since the ATP tournament in Adelaide, where he triumphed on January 8.

Media in Melbourne report that Djokovic has been removed from today’s training schedule, but the reasons for the cancellation are not stated.

The Serbian tennis player will play in the first round tomorrow around 11 a.m. CET against the Spaniard Roberto Carballes Baena.

The nine-time winner of the Australian Open, who is returning to the first Grand Slam of the season after last year’s deportation, will play his first match on Tuesday, not before 10:30 a.m. CET, against Spaniard Roberto Carballes Baena.