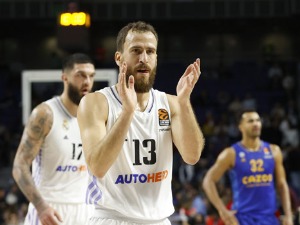 The match between Efes and Barcelona was marked by an argument between the visiting coach Jasikevičius and the Serbian national team member Kalinić..

The Lithuanian sent Kalinić from the bench to the locker room after the argument, and after the match at the press conference, he briefly commented that the Serbian basketball player “showed disrespect to the team”.

The Efes team has five defeats, and after the triumph over Barcelona, ​​they registered their third victory and are currently in 13th place.

The Catalan club is in fifth position with a record of five wins and three losses.

The best player of the game was Laprovitla from Barcelona who recorded 28 points, two rebounds and two assists.

In the first quarter, the game was even, but in the second part, the host made a score advantage of as many as 18 points, with a score of 53:35.

In attack, Alba had no solution for the defense of the home team. Until the end of the match, Real played a tactically precise game and eventually triumphed.

Poirje was the best player of the match, he scored 19 points and recorded seven rebounds.

With the Alba team, Procida finished the game with 13 points as the most effective player.

Real is in the fourth position with five wins and three losses, while Alba registered its fifth defeat this season in the Euroleague, and has three triumphs.

In the next round, Real hosts Valencia, and Alba welcomes Red Star in Berlin.