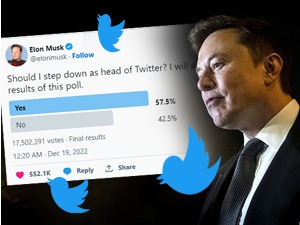 Mask is on Sunday asked Twitter users should he step down from the head of the company, promising to abide by the results of the survey. When the poll closed on Monday, 57.5 percent said he should retire.

Musk, who is traditionally a very active user of the platform, did not post on Twitter for several hours after the voting ended.

His silence was finally broken when he responded with “Interesting” to one comment that speculated that the poll results were invalid due to fake accounts.

Responding to another user’s suggestion that “subscribers with a blue badge should be the only ones able to vote in Twitter policy polls,” Musk said: “Good point. Twitter will make that change.”

As the majority owner of a private company, of course no one can force Musk to step down as CEO, but a series of confusing decisions over the past few days has caused even some of his closest supporters to cut ties with him.

The decision to ban the warrant tracking the location of his private jet last week was followed by a mass suspension of critical journalists covering the ban. This in turn led to an exodus of some engaged users to other social networks, mainly its decentralized competitor Mastodon.

However, in many cases Musk gave the impression that he had already made up his mind about the outcome before the announcement: he announced the sale of his shares in Tesla, for example, long before it was put to a vote, and the plan to bring Trump back online long before he bought Twitter.

Thus, the idea of ​​retiring from the position of chief executive was hinted at long before the Twitter poll was published. On Nov. 16, he told a Delaware judge that he plans to scale back his presence on Twitter and “find someone else to run the company.”