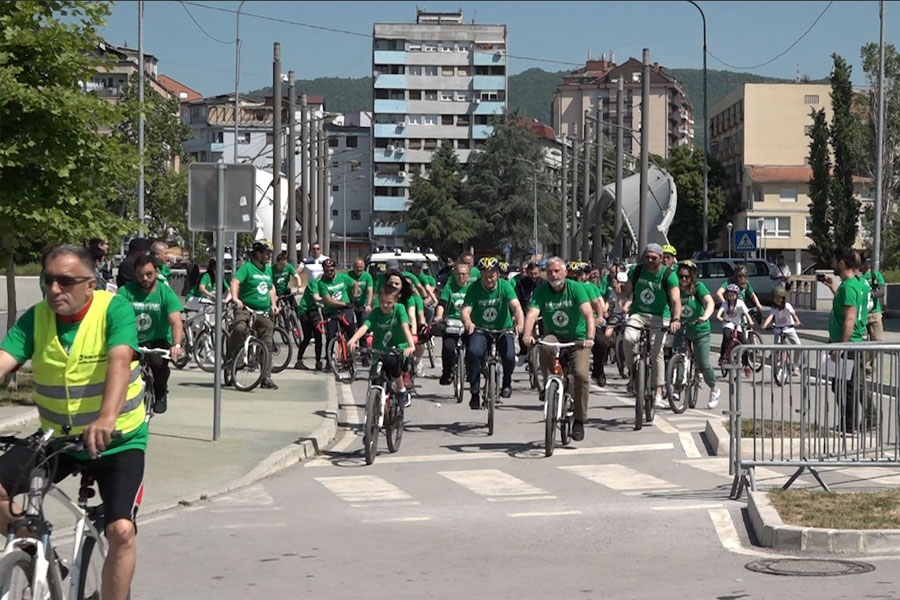 Dozens of representatives of local and central institutions, international, civil society, as well as citizens, have participated in the bicycle tour held today in Mitrovica, on the occasion of World Environment Day.

The Deputy Mayor of Mitrovica, Faruk Mujka, told KosovaPress that this municipality is committed to pursuing green policies, while ordering that the near future will be much better for bicycles.

“We are a municipality committed to pursuing green policies, we have a mobility plan which provides for the expansion of bicycle paths, resolving the issue of urban parking, and this is a message we want to show to all citizens. “We are really thinking about bicycles and in the near future it will be much better for them”, said Mujka.

Fitore Pacolli, member of the Assembly of Kosovo, stressed the need for as few cars and as many bicycles in cities.

According to her, it is necessary to invest in safe paths for pedestrians, cyclists and public transport, so that the movement of citizens is as easy, safe and accessible as possible.

“I think that cities are our future, green cities, with as few cars and as many bicycles as possible. We need to invest a lot in safe paths for pedestrians, cyclists and public transport, so that our movement and circulation as citizens is as easy, safe, and as accessible as possible “, stressed Pacolli.

Omar Sadik, head of UN-Habitat Kosovo, said that this day has a specific focus on the eco green movement of citizens.

“Today on this occasion, we have the opportunity to launch the first guidelines of the urban mobility plan in Kosovo, based on the guidelines of the European Union. This is important because transport contributes to a significant amount of gas emissions in Kosovo. Currently the increase of traffic in Kosovo is estimated to be 4.4%, which means that in 16 years, the number of private cars on the roads of Kosovo can double, we can not allow this to happen, because it has major environmental consequences, health consequences, and affects Kosovo’s economic productivity. “We need to break the trajectory of car-oriented development, of Kosovo policies, and focus on non-motorized movement options, such as cycling,” he said.

Otherwise, this event was organized by UN-Habitat Kosovo in cooperation with the municipality of Mitrovica.

The “Hospital Neighborhood” is left without drinking water