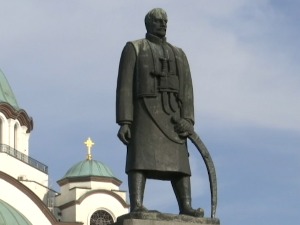 Why does Patriarch Pavle levitate, where does Bata Živojinović come from in national costume, are just some of the questions for the authors of the monument that were the target of criticism. They lead to an even more important point – is there artistic freedom when it is necessary to present a personality who gained public favor during his lifetime?

“There is that artistic freedom, but we follow a line to get as close as possible to the character of the person.” Bata is a man of the people, I was in constant communication with the family, so we jointly reached a consensus that it should look like this,” says sculptor Ranko Đanković.

While many are dissatisfied when a personality is not faithfully represented, artists like Mrđan Bajić, the author of the monument to Zoran Đinđić that will be placed on Studentski trg, say that it is time for different conceptual solutions.

“I thought that since there is some autonomy of the artistic language, that a great emancipator should be spoken about in a language that is not standardized, nineteenth-century kitsch.” We wanted to make something that was minimal, clear and direct to us,” says Bajić.

The decision on new monuments is made by local governments, and the initiator can be any natural or legal person.

In the capital city, proposals arrive at the address of the Committee for Monuments and Names of Squares and Streets of the Belgrade City Assembly. The assembly makes a decision, forms a committee for erecting the monument, which further considers all important issues, such as whether to announce a competition or invite a specific sculptor.

A bad movie is quickly forgotten like a failed play, and monuments remain permanently in the public space. Tastes are different, but that is exactly why representatives of the profession should have the main say.

Historian Dr. Nenad Leibensperger notes that the local self-government bodies that form the commission sometimes bypass the profession, choose people who are more suitable according to some other criteria.

“Even when they are chosen based on their expertise, sometimes these colleagues unfortunately know that they are acting according to the demands of the authorities,” adds Leibensperger.

Controversies about the location – an old story

Apart from the appearance of the monument, controversies often arise due to its location. That this problem is not recent, is evidenced by the history of the Wolf Monument.

“Almost five years have passed since the monument was in Belgrade, and no suitable location was found. The original location was envisioned in the Academic Park, but the public was divided there, and in the end, the current location of the Wolf Monument was chosen as the final location. A hundred years later, there are always controversies and different solutions,” says the director of the Institute for the Protection of Cultural Monuments of the City of Belgrade, Olivera Vučković.

Experiencing them as a choice of the ruling structure, monuments often serve to receive criticism addressed to those who decided on their creation and placement.

Among the monuments that caused the most spears to break among the public was “Pobednik”, and now it is one of the most important symbols of Belgrade.