Fires are raging in Antalya – three folks had been killed, vacationers are leaving motels 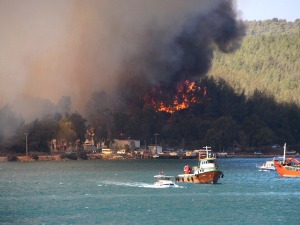 Dozens of villages, as well as some hotels, have been evacuated, and published footage shows burned buildings, but also people fleeing across the fields, while firefighters and helicopters are trying to contain the fire in Managua, which is 75 kilometers away from the resort of Antalya.

Officials said more than 60 fires broke out in 17 provinces on Turkey’s Aegean and Mediterranean coasts this week.

Warm weather and strong winds caused a fire in the district of the resort of Antalya and nearby villages. Authorities evacuated 18 villages in the Antalya resort district, while another 16 villages were evacuated in the neighboring provinces of Adana and Mersin.

The Emergency Situations Service states that firefighting planes, 19 helicopters, about 250 vehicles and 960 people are part of the efforts to put out the fire.

Russian planes are also participating in extinguishing the fire that engulfed the forest in the Turkish province of Antalya, the Russian embassy in Ankara announced.

Of those forest fires, 36 have been contained, but firefighting efforts for the remaining 17 continue.

Abdixhiku: One of our most beloved and significant candidacies is that of Sibel Halimi for Ferizaj – Latest News