Flats for researchers on the College of Kosovska Mitrovica 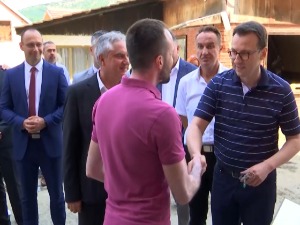 Funds for the construction were provided by the Government of Serbia.

After handing over the keys, the director of the Office for Kosovo and Metohija, Petar Petković, said that the construction of two more residential buildings in Zvečan was in progress.

“A total of 17 new buildings and 202 apartments in the north of Kosovo and Metohija. Last year we built 10 new buildings, all for our people, because our future is here, because we want to survive and stay here, and what makes us especially happy is that you could all you see is a large number of children, who welcomed us at the entrance.This is our future, we are fighting for it, we are fighting for peace, stability, for science and for knowledge and that is all that we sublimate on this occasion, among other things and in this distribution to our dear fellow citizens here in Zvečan “, said Petković.

Climate for subsequent week – temperatures as much as 37 levels Celsius