From match to match, I increase the extent, I would like as many Serbian tennis gamers as attainable on the Central courtroom 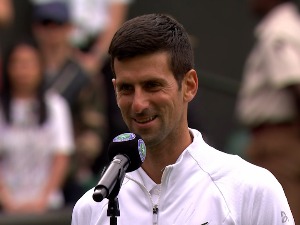 Djokovic routinely defeated his compatriot Miomir Kecmanovic 3-0 in the third round of Wimbledon.

“I don’t take the presence of the audience for granted, so thank you for coming and making this match better. I started well, with good focus, I know Miomir very well, we trained many times together,” Novak’s first impressions after the match.

Novak pointed out that it was great to play against the Serbian tennis player on the Central court.

Djokovic achieved the 330th victory at the Grand Slams.

Novak will be on the field again on Sunday, when he meets Van Reithoven.

“As a player, you want to raise the level of the game in every match and I think that’s exactly what is happening. I know I can play better, but it was great so far and I’m looking forward to a new challenge,” Djokovic concluded.