Germany with out mercy in direction of Armenia, attracts between Switzerland and Italy 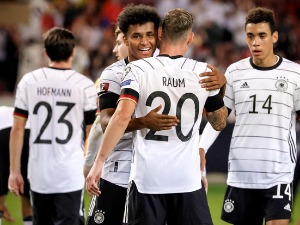 The Germans had no mercy on the guests, so they sent them away from the stadium in Stuttgart with six goals.

Gnabri started the goal with two goals, Marco Royce continued, and before going on vacation, Timo Werner joined the scorers.

In the continuation, Hoffman and young Adejemi scored, and one goal was annulled by Werner.

Germany is first in Group J with 12 points, Armenia has 10, Romania 9, Northern Macedonia 8, Iceland 4, while Liechtenstein has no points.

Switzerland and Italy played a goalless draw, and Giorgino did not use the penalty.

In the second match of the group, Bulgaria defeated Lithuania 1: 0.

Italy is first with 11 points, Switzerland has 7, Bulgaria 5, Northern Ireland 4, Lithuania is without points.

Belgium defeated the Czech Republic 3-0, while Wales celebrated 3-2 in Belarus.

Belgium is first with 13 points, the Czech Republic has 7, Wales 6, Belarus 3, Estonia is without points.

England defeated Andorra with 4: 0, Albania was better than Hungary with 1: 0, while Poland outclassed San Marino with 7: 1.

England is first with 15 points, Poland has 10, Albania one less.

Hungary has 7, Andorra 3, San Marino has no points.

Spain defeated Georgia 4: 0, and the Kosovo team played 1: 1 with the Greek national team.

Results of today’s matches Qualification for the World Cup:

Rrahmani: We have become the team we used to be – Latest news