How can Sandgren go to New York and I am unable to? 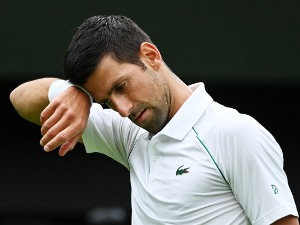 The Serbian ace reminded of the fact that the American tennis player Tennis Sandgren was also not vaccinated against the coronavirus, but that the rules do not apply to him as to foreign citizens.

Sandgren publicly supported Novak and criticized the US government, and Djokovic revealed that he had communicated with the American in the previous days.

“I corresponded with him a few days ago, thanked him for the support he gave me in public in this situation. What he said is completely logical. If unvaccinated players are forbidden to participate in that tournament, then that rule should to apply to everyone. “

“I don’t see the medical logic that he can play because he is a US citizen, although he has not been vaccinated, and I have been denied that right. If I had a US” green card “or passport, I would be allowed to play. If it may have some political logic … I would rather not go into that, and you can decide for yourself why, “Djokovic told Serbian media at Wimbledon.

The winner of 20 Grand Slam trophies repeated that he would like to play in New York.

“Grand slams are the competitions that count the most in this part of my career, they deserve my special attention. But, well, if I don’t have a chance to play there, it won’t be the end of the world, let’s move on. I’m currently focused only on this tournament. “, Novak pointed out.