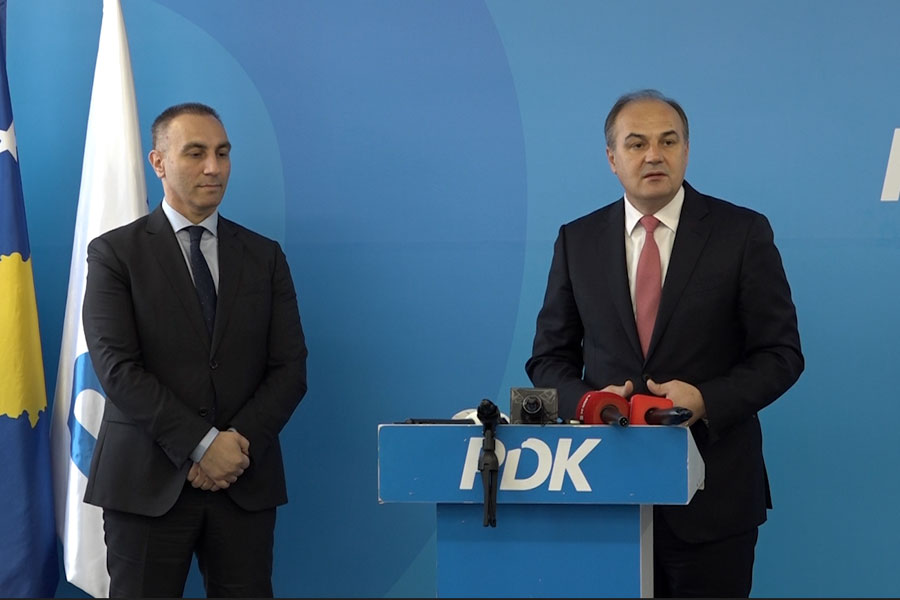 Acting Chairman of the PDK Enver Hoxhaj met today with the First Deputy Prime Minister of Northern Macedonia Artan Grubin, on which occasion they called for more migrants to be registered in the civil registry of the population of this country, a process that began on March 1 of this year.

Hoxhaj in a press conference called on the entire Albanian diaspora from the Balkans to support the civil registration process in Northern Macedonia.

He said that the registration of citizens in Northern Macedonia is of great political importance for the future of Albanians in this country.

He called on the incoming government to initiate a meeting between the two governments, as this, according to him, would have an impact on political cooperation, defense and security, as well as economic development.

“This would have a great impact on political cooperation, security, defense, economic development, but above all in terms of inter-fraternal cooperation between Pristina, Skopje and Tetovo,” said Hoxhaj.

The First Deputy Prime Minister of Northern Macedonia Artan Grubi said that so far they have exceeded the number of 72 thousand citizens registered by the diaspora, while adding that they expect help to increase this number to 200 thousand.

According to Grub, increasing the numbers of Albanians in northern Macedonia is vital to their future.

As for the meeting between the two governments, he said they are looking forward to holding it in order to realize 15 bilateral agreements, which are expected to be signed.

“The increase in numbers is vital for the implementation of the vital rights for the implementation of the political rights of the Albanians in Northern Macedonia. We also talked about a long-standing initiative of Hoxhaj, which is to hold a joint meeting of our two governments. There are over 15 bilateral agreements waiting to be signed, since the time when Hoxhaj was Deputy Prime Minister, and we can not wait for the formation of the new government in Kosovo to implement those agreements, starting with the removal of the border between us in Blace, and in Bellanica “, said Grubi.

Artan Grubi is staying today in Kosovo, where during the day he is expected to hold meetings with the presidents of other political entities.