I actually wished to get again on this area 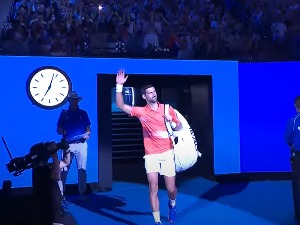 Because of the whole situation in January 2022, there was a big question about how the Australians would welcome Djokovic, the man who won the most Grand Slams in Melbourne.

Novak was well received in Adelaide, with a large number of fans from this area. But, this is a duel with the native Nick Kyrgios, in front of a full “Rod Laver” arena with 15,000 seats. Thereby, all tickets were sold out within an hour.

Novak Djokovic was duly announced by the official announcer and when he stepped out onto the field he was accompanied by applause and cheers.

Djokovic then addressed the audience.

“I was overwhelmed by emotions, I really wanted to return to this court. Thank you all for coming. We will certainly enjoy good tennis,” Novak said in a statement before the match.

The announcer touched his back injury, which the Serbian tennis player had problems with in Adelaide.

“It’s good for now, I’m just worrying about this match right now. Nick is in my thoughts and prayers,” Djokovic joked in his style.

Djokovic and Kyrgios meet on court for the first time since last year’s Wimbledon final.

Workers At Chinese-Owned Mine In Serbia Protest For Better Wages, Working Conditions