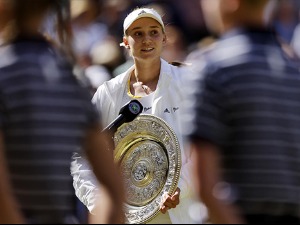 After a reversal in the final, Rybakina reached titles at Wimbledon.

“I was very nervous during the match and before it, I’m happy that it’s over… I’ve never felt anything like this, I thank the audience for their support, which was fantastic, incredible throughout the tournament,” said Rybakina.

The native of Moscow congratulated her rival on what she achieved in London.

“I want to congratulate Ons for a great match and everything she did. I really think you are an inspiration not only for the young generation, but for everyone. You play great, it’s really nice to play against you, I ran a lot today, I don’t think I have any more strength for what. This is just an amazing feeling,” Rybakina said.

The Muscovite, who replaced the Russian flag with the Kazakh one in 2018, thanked her team for their support, and the president of the Kazakhstan Tennis Federation, businessman Bulat Utermatov, for coming to London to watch her.

“I am very happy that he came to support me in the semi-finals and the final. Another thank you to the president of the federation and the entire team, sponsors, everyone who is at home, and most importantly to my parents. My sister is also here and it is only the third time that she has with me at the tournament,” said Rybakina.

The Tunisian woman sportily accepted the defeat and expressed her hope that next time she will look forward to the Grand Slam trophy.

“First of all, I want to congratulate Elena, she was great, I congratulate her and her team, she deserved this, I hope that next time I will be better,” said Žaberova after the match on the Central court.

She became the first Arab woman in the final of a Grand Slam tournament.

“I love this tournament, I’m sad, but there can only be one winner. I’m happy that I manage to inspire many generations in my country, that’s something that’s most important to me. I want to thank this wonderful audience for their fantastic support throughout the two weeks.” pointed out the tennis player from Tunisia.

Žaberova will leave London richer by 1.24 million euros, which belongs to the defeated finalist.