LOCAL POWERS THINK THEY ARE ABOVE THE LAW, due to money they danger lives and wreck roads! Faulty trailers transported a transformer weighing as a lot as 170 tons 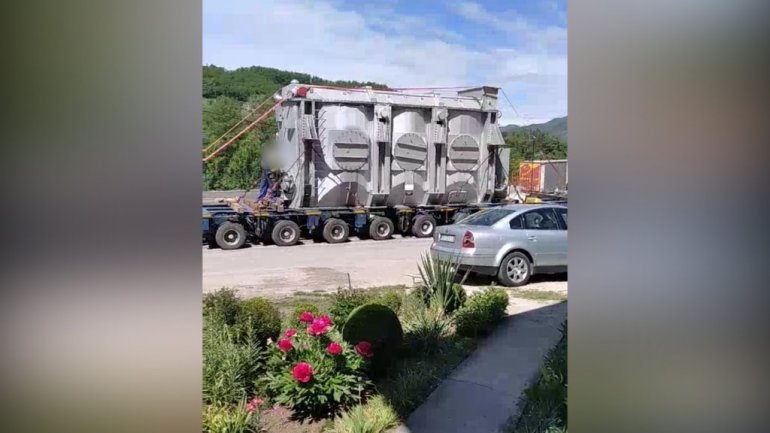 With the arbitrariness of local and Belgrade powerful people, the safety of thousands of people in this part of Serbia is directly endangered, and the roads are significantly damaged.

Under as yet unexplained circumstances, this “wild special transport” was escorted to the railway station in Priboj last Saturday, accompanied by the traffic police (!?!), Although ten days earlier the same traffic police of the same trailer (owned by the Belgrade company “Savatrans”) excluded from traffic and confiscated their license plates as it was established through illegality.

Then, on May 12, at the control measurement, it was determined that the trailers were overloaded, ie that they had significantly more than the legally maximum allowed 16 tons per axle, thus significantly damaging the roads.

None of this, however, bothered the arrogant powerful people to return the plates to the faulty trailers completely illegally last Saturday and order the local traffic police to escort the “transport”!?! Why did they do this? Clearly, the only answer may be cash. Dirty cash that someone put in their pocket to allow illegal “special transport”.

To make matters worse, “Roads of Serbia” revoked the permit for the transport of transformers, which was previously issued to the company “Savatrans”. So, not only were the dangerous transformers transported by faulty trailers that were excluded from traffic, but it was also done without the permission of “Roads of Serbia”!?!

And when we add to all that the fact that the traffic police immediately after the “wild transport” on Saturday, May 22, at the railway station in Priboj, removed the registrations from the trailers again, it is clear that this was actually a pirate operation that was done just to someone fat charged!

The arbitrariness of local and Belgrade powerful people directly endangered the safety of thousands of people in this part of Serbia, and the roads were significantly damaged.

The regulations of the European Union, where it is strictly forbidden to transport current transformers without special “transformer box” trailers, also show how dangerous this way of transporting cargo is for people and the environment.

– Such transport is dangerous and hugely unsafe. During it, a rollover can occur, which can cause serious damage, but also human casualties. A special factory construction, called a “transformer box”, is used to transport transformers to the EU. The transformer was then housed in that special box, secured on all four sides and the possibility of breakdown and overturning was minimized. It is not clear which of the powerful and why he put so much pressure to carry out that “wild transport” in Priboj. Something like this must never happen again, because it will be too late when an accident happens and someone dies – says one of our interlocutors.

Yesterday, the Chief of the Traffic Police Administration, Nebojsa Arsov, persistently avoided our journalists and questions about “wild special transport” in the vicinity of Priboj.

We asked the mayor of Arsovo why the Traffic Police first confiscated the plates and wrote the reports with the trailers of the company “Savatrans”, and then illegally returned them and sent the risky cargo to the final destination, only to remove the plates again!?!

We were interested, among other things, in why they allowed this illegal transport to damage the state budget on several grounds, in the amount of several millions.

Unfortunately, all our questions remained unanswered, because Nebojsa Arsov only read the message and did not answer a word until the conclusion of this issue.

Just before curfew, the capital is boiling with cars