Majstorović “judged” Latvia, Serbia goes to the semifinals of the World Cup 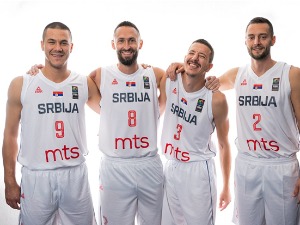 New, fifth consecutive victory of Serbian basketball players at the World Cup. In the quarterfinals, Latvia, the Olympic champion, fell.

In the dramatic finale, Serbia defeated old acquaintances on the wings of Dejan Majstorović and thus qualified for the semifinals.

It started very hard, with a small number of points and a large number of fouls.

After the introductory minutes, with three tied points by Stojačić, Serbia took a significant advantage in the amount of 8: 5.

However, Latvia did not give up at any moment of the match, but completely returned to the match.

With the Lasmanis double, the Latvians took the lead – 12:11.

A few moments later, Serbia first gained a big 17:15 in the very finish with Stojacic’s points, and then with Vasic’s basket and foul.

Lasmanis re-entered the scene, scoring a tough two and bringing the tie.

In the most uncertain moments, the most experienced member of our selection took responsibility.

Dejan Majstorović first hit for two, then pulled out a foul and hit one free throw.

With the result of 20:17 for Serbia, in the last attack in the match, Majstorović sent his rivals “with a change” with a new double.

Serbia advanced to the finals, which is scheduled for Sunday.

Serbia will meet the better team from the duel between Belgium and Poland in the semifinals.