Mannequin maker’s cup for the primary time on the Honest, essentially the most home mannequin makers who domesticate a practice relationship again to the interval of the JNA 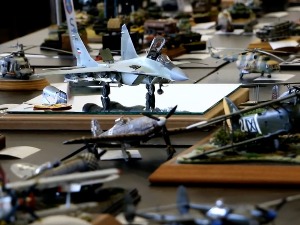 Side by side – planes from the First and Second World War. Next to them are modern fighters and bombers. It’s the same with tanks and armored fighting vehicles. Who made the best model – is measured in several categories.

The judges evaluate how the mock-up is technically made, i.e. how it was composed. The most important thing is its consistency with the original, that, say the modelers, is the goal of the competition.

Models are most often in the scale 1:72 and 1:48. The competition is extremely strong this year as well thanks to competitors from abroad.

“We have been coming to the New Year’s Cup for six years. This year we are competing in 12 categories, we brought 40 models. It is important that we participate, and it is not so important whether we win”, points out Aleš Vovk, a model maker from Slovenia.

The team from Slovenia also organizes a workshop for the youngest enthusiasts. They pass on their passion for models to the young.

Most model makers are from Serbia. The hobby has been developed, and model makers have a tradition dating back to the time of Yugoslavia and the period of the Yugoslav People’s Army. Many people know each other and are friends.

“A population that engages in a beautiful, humane hobby that survives in these areas, this hobby is always linked to some countries that are economically stronger, because the hobby requires material investment,” emphasizes Saša Jovanović, one of the organizers.

Makers, as they say, come up with various ways to overcome these problems.