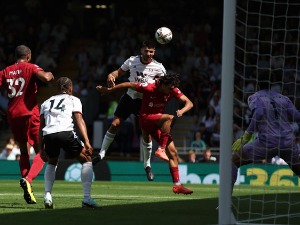 In the second match of the first round of the Premier League, Fulham welcomed Liverpool in London.

When Liverpool took control and began to attack, Aleksandar Mitrovic sent the crowd into ecstasy.

Tete crossed the ball from the sideline, Mitrović jumped high over Alexander-Arnold and shook the net.

Liverpool had a great chance before the break, but Luis Diaz’s powerful shot was blocked by the post.

In the continuation, Liverpool pressed with all their might, which paid off in the 64th minute.

Darwin Nunez entered the game, and then with a goal "with a heel" brought a tie.

And, just like in the first part of the game, when Liverpool went with all their might towards Fulham’s goal, the host gets a goal.

Mitrović pulled the ball, dribbled in a one-on-one situation with Van Dijk, then fell after contact.

The referee pointed to the penalty spot, and after checking in the VAR room, Mitrović placed the ball on the chalk.

A strong shot, elusive for Allison and Fulham took the lead with 2:1 in the 72nd minute.

Liverpool didn’t give up and equalized in the 80th minute – Nunez assisted Salah, and the Egyptian put the ball into the net.

In the fifth minute of stoppage time, Fulham had a lot of luck, as Henderson hit the bar from distance.