Mitrovic introduced Fulham a victory in Leicester, with out targets within the Arsenal and Newcastle derby 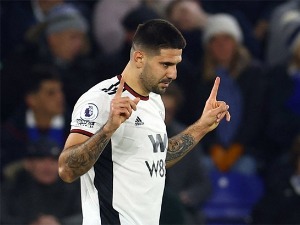 Aleksandar Mitrović’s new goal for Fulham’s new triumph – the Serbian striker scored the only goal for his team away from home in Leicester.

The top scorer in the history of the Serbian national team scored his 11th goal of the season, equaling his best performance in England’s elite league.

In the 17th minute, Mitrović took advantage of Willian’s assist, dropped the ball with his chest and routinely beat the helpless goalkeeper Ward.

However, at the end of the match, the Fulham striker received his fifth yellow card this season for complaining, so he will miss his team’s next match, against Chelsea.

Leicester was the better rival from that moment on, but Bernd Leno shone in Fulham’s goal, so Marco Silva’s team reached their eighth triumph in the competition and shared sixth place in the table.

Arsenal failed to continue the series of triumphs, as Newcastle managed to defend their net at the “Emirates”.

Mikel Arteta’s team was the better opponent, but it was difficult to find a way to Nick Pope’s goal, while the guests decided to defend their goal and rarely threatened on the counterattack.

“The Gunners” kept the first place in the table with 44 points won, while Newcastle is still third with 35.

Manchester United has that much, which defeated Bournemouth 3:0 in the match of the 19th round at “Old Trafford”.

Casemiro gave the “devils” the advantage in the first half, while Luke Shaw and Marcus Rashford set the final score.

Before the game, the home fans greeted Lisandro Martinez, who became the world champion with Argentina at the World Cup in Qatar.

Brighton because he was convincing in Liverpool against Leicester – 4:1.

Mitoma gave the “seagulls” the advantage in the first half, and then Ferguson, March and Gross added to Pickford’s goal.

The final result was set by Demarai Gray from the penalty spot in the last moments of the match.