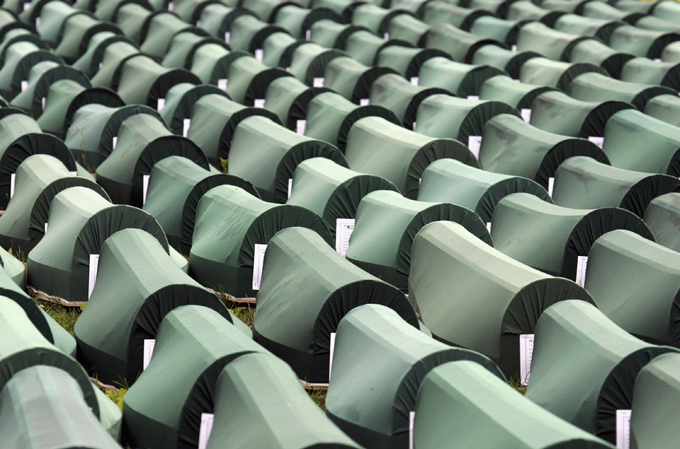 Wanted for his alleged role in the atrocities of the Bosnian conflict from 1992 to 1995, the former general looked frail and very slow as he was escorted by four guards on Thursday in the first step of the extradition process.

He wore a dark blue jacket and a baseball cap with gray hair that stuck out on the sides, and in his left hand was what looked like a towel.

He could be heard on state television saying “Hello” to someone in court. A guard said to him: “Let’s go, General.”

Mladic’s attorney said the judge stopped the questioning because the suspect’s “poor physical condition” made him unable to communicate.

Mladic faces extradition to The Hague, the Netherlands, where the United Nations International Criminal Tribunal for the Former Yugoslavia (ICTY) is located, where his former political ally Radovan Karadzic is also detained and 27 defendants are currently on trial.

But Mladic’s lawyer said Mladic had claimed he would not submit to the authority of the UN war crimes tribunal.

“He is aware that he is under arrest, he knows where he is and he said that he does not recognize the Hague Tribunal,” said Saljic.

The interrogation of Mladic will resume on Friday, the deputy war crimes prosecutor said.

On Thursday, Serbian President announced Mladic’s arrest, 16 years after he was charged with atrocities allegedly orchestrated during the Balkan Wars.

“On behalf of the Republic of Serbia, we are announcing the arrest of Ratko Mladic,” said the country’s President Boris Tadic.

“Today we closed a chapter in our difficult history that will bring us one step closer to full reconciliation in the region.

“All criminals must face justice,” he said.

Tadic said the 69-year-old would be extradited to The Hague but didn’t give a timeframe.

However, European foreign policy chief Catherine Ashton said Mladic is expected to be extradited in nine or ten days.

Local media had initially reported that a man had been arrested who posed as Milorad Komadic and was believed to be Mladic.

According to Al Jazeera’s Aljosa Milenkovic, Mladic was arrested at 5:30 a.m. (3:30 a.m. GMT) on Thursday. He was clean-shaven, looked a lot to himself, but much older. His right arm was apparently paralyzed and he did not resist arrest.

Rasim Ljajic, the minister responsible for searching for fugitive war criminals, said Mladic “looked pale, as if he had been inside for a long time”.

“Mladic had two loaded weapons that he did not use. He was cooperative and did not oppose the arrest, ”he said. “He spoke calmly to officers.”

The Belgrade radio station B92 announced that he had been arrested in a village near the northern Serbian city of Zrenjanin.

Bakir Izetbegovic, the Muslim member of the three-person Bosnian presidency, said the arrest was made in cooperation with Bosnian security agencies but did not provide any further details.

The arrest was welcomed by world leaders and a spokesman for EU official Ashton described it as “an important step forward for Serbia and the international justice system”.

Mladic was charged in 1995 with the Srebrenica massacre of 8,000 Muslim men and boys and the 43-month siege of the Bosnian capital, Sarajevo, in which around 10,000 people died.

The UN indictment against Mladic said he was the operative mastermind of the massacre and also cited the establishment of camps and detention centers for Bosnian Muslims as part of an ethnic cleansing campaign.

His arrest is considered a prerequisite for Serbia’s accession to the European Union.

Milenkovic from Al Jazeera said, “EU politicians have repeated over and over again that Mladic is the prerequisite for Serbia’s entry into the bloc”.

Al Jazeera’s Tony Birtley, who covered the Bosnian conflict, said the arrest would lead to better relations between Serbia, neighboring Bosnia-Herzegovina and Croatia.

“This is one of the most important [factors]. The fact that they hadn’t given up on Mladic before was a massive stumbling block; it held everything back.

“Now the Serbian government can say: ‘Let’s go ahead and make this region a better region again’.

“It’ll wrap up an ugly part of your story.”

Families of the victims of the Srebrenica massacre have expressed relief at the arrest.

“It’s really very important to us,” said Hajra Catic, chairwoman of the Srebrenica Women’s Association, who lost her son and husband in the slaughter.

Prosecutors in The Hague said they believed Mladic was hiding in Serbia under the protection of people who consider him a hero. He was last seen in Belgrade in 2006, but had lived openly in the country before Slobodan Milosevic was overthrown in 2000.

But Milenkovic said it was still unclear who helped the fugitive hide and whether there would be further arrests.

Karadzic, the Bosnian-Serb wartime political leader and mentor to Mladic, was arrested in Belgrade in July 2008 and is currently on trial in The Hague.

In a message from his prison cell, Karadzic regretted Mladic’s arrest.

“President Karadzic regrets General Mladic’s loss of freedom and looks forward to working with him to uncover the truth about what happened in Bosnia,” Karadzic’s American lawyer Peter Robinson told the Associated Press shortly after his visit to Karadzic.

Mici: To give our best in Prishtina to make the return match easier – Latest News