Montenegro and Bosnia and Herzegovina proceed the qualification for Mundobasket, the Macedonians are eradicated 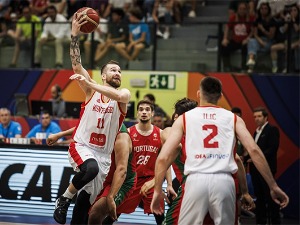 The fourth victory in the qualifiers was recorded by the team of Montenegro, who defeated Portugal 77:62 as a guest in Odivelas, thus confirming the second place in group E.

Montenegro carries two victories to the next stage of the competition, and in addition to France as the first-placed and Hungary as the third-placed in the group, its opponents will be Lithuania, the Czech Republic and Bosnia and Herzegovina.

“Dragons” defeated Bulgaria 76:73 in the last round of Group F on their home ground, in a direct fight for the third place in the group.

The hero was Jenan Musa, who hit a three-pointer with a second left in the game.

First-ranked Lithuania carries over three victories to the next round, the Czech Republic two, Bosnia and Herzegovina one.

North Macedonia was eliminated from the competition, as it was defeated by Ukraine 73:68 in the last round of Group G at home.

The Macedonians finished last in the group, from which Georgia, Spain and Ukraine go to the further course of the competition, and they will be joined there by Italy, Iceland and the Netherlands from Group H.

The next qualifying window is scheduled for the end of August, and two games will be played.