“Nanocraft”, one of many 9 startups that can be supported by the “Telecom Serbia” Fund 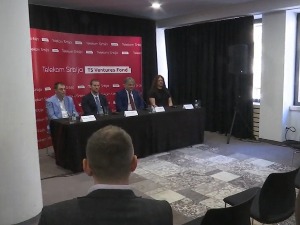 Maxim and his team are working on tests that will be able to detect cardiovascular diseases in the initial phase or the body’s tendency to develop them through blood analysis. The tests, he says, will be cheap, available to everyone and accurate.

“In the last three to four decades of research, the focus is slowly shifting to that one certain group of chemicals that are considered to be both cause and effect at the same time. Diseased tissues release, that is, create substances that then leak out and pass into the bloodstream. All that remains is to accurately isolate those specific chemicals so that we can design a prototype test for detection,” explains Maksim Baković, founder of the startup “Nanokraft”.

On this path, support is provided by the “Telecom Serbia” Fund, which, as they say, was founded with the aim of helping young people to turn their idea into a business in their own country. 25 million euros will be allocated for nine projects.

“In addition to recognizing the idea and investing certain money in the startup, we help them commercialize the idea and together with them find American and other investors who will further invest in them,” says Vladimir Lučić, CEO of Telekom Srbija “.

The State University recognizes that startups can offer economical and efficient solutions in the field of biochemistry, and the economy can take advantage of this.

“They can contribute through some small research teams, through some ideas that individuals and small teams can come up with.” To find some effective solutions that the industry does not have time to deal with”, emphasizes Prof. Dr. Bojan Marković, vice dean of the Faculty of Pharmacy in Belgrade.

In “Telekom Srbija” they expect the strengthening of the startup community in Serbia and believe that more young people will decide to start their own business. The fund also plans to expand the network of collaborators and connect with other funds in the local environment and the world.