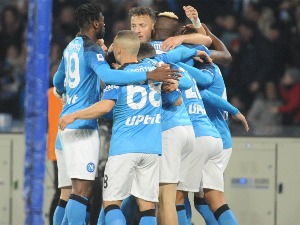 Napoli convincingly defeated the guests from Turin on their field. Juventus suffered their heaviest defeat since 1993 and the match against Pescara in which they conceded five goals in Serie A

The home team took the lead in the 14th minute through Viktor Osimen, while the second goal for Napoli in the 39th minute was scored by Hvich Quaracheli.

Three minutes before the end of the first half, the sky-blue lead was reduced by Angel di Maria after a nice action by the black and whites.

Napoli was quite convincing in the second half, half of the shots they sent towards the opponent’s goal ended up behind Wojciech Szczesny. The first of the three goals was scored by Amir Rahmani in the 55th minute. Osimen scored his second goal of the match in the 65th minute, and the final result was scored seven minutes later by the Macedonian footballer Elif Elmas.

This is the first time since 1993 and the match against Pescara that Juventus have conceded five goals in Serie A.

After a convincing victory over Juventus, Napoli leads the Serie A table with 47 points and has 10 more than the second-placed Milan, who has a game less and the third-placed Juventus.