Our objective is to overthrow the SDSM 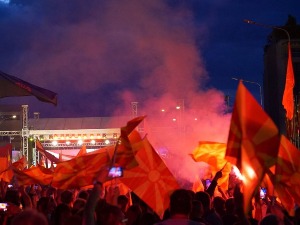 The opposition VMRO-DPMNE held a protest in Skopje in front of the Government building, Telma reports.

Tens of thousands of VMRO-DPMNE supporters and their coalition partners have called for early parliamentary elections, as they say it is a solution to the economic and political crisis in which the ruling SDSM and DUI are leading the country.

The leader of the party, Hristijan Mickoski, said in his address to the gathered that change must be and that the fight will continue everywhere – in the parliament, on the streets, in cities and villages.

“Our great goal is to defeat and punish the Social Democrats and their reckless, criminal and treacherous government,” Mickoski said.

Calling for early elections, he said that the alternative to their victory in the polls would be the loss of the country.

“Either we will fight and win or Macedonia will disappear. Do we have a choice,” Mickoski said.

Mickoski criticized Prime Minister Dimitar Kovacevski and the government for, he says, keeping silent the latest proposal from France that Sofia’s demands, such as the inclusion of the Bulgarian minority in the constitution of northern Macedonia, be included in the negotiation process between Skopje and the European Union.

“To be clear, this is nothing but capitulations without delay, what could be called the Bulgarianization of Macedonia in installments or a diplomatic knockout,” Mickoski said.